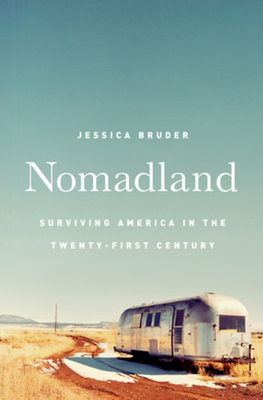 Surviving America in the Twenty-First Century

"People who thought the 2008 financial collapse was over a long time ago need to meet the people Jessica Bruder got to know in this scorching, beautifully written, vivid, disturbing (and occasionally wryly funny) book." —Rebecca Solnit

From the beet fields of North Dakota to the National Forest campgrounds of California to Amazon’s CamperForce program in Texas, employers have discovered a new, low-cost labor pool, made up largely of transient older Americans. Finding that social security comes up short, often underwater on mortgages, these invisible casualties of the Great Recession have taken to the road by the tens of thousands in late-model RVs, travel trailers, and vans, forming a growing community of nomads: migrant laborers who call themselves “workampers.”

On frequently traveled routes between seasonal jobs, Jessica Bruder meets people from all walks of life: a former professor, a McDonald’s vice president, a minister, a college administrator, and a motorcycle cop, among many others—including her irrepressible protagonist, a onetime cocktail waitress, Home Depot clerk, and general contractor named Linda May.

In a secondhand vehicle she christens “Van Halen,” Bruder hits the road to get to know her subjects more intimately. Accompanying Linda May and others from campground toilet cleaning to warehouse product scanning to desert reunions, then moving on to the dangerous work of beet harvesting, Bruder tells a compelling, eye-opening tale of the dark underbelly of the American economy—one that foreshadows the precarious future that may await many more of us. At the same time, she celebrates the exceptional resilience and creativity of these quintessential Americans who have given up ordinary rootedness to survive. Like Linda May, who dreams of finding land on which to build her own sustainable “Earthship” home, they have not given up hope.


Praise For Nomadland: Surviving America in the Twenty-First Century…

People who thought the 2008 financial collapse was over a long time ago need to meet the people Jessica Bruder got to know in this scorching, beautifully written, vivid, disturbing (and occasionally wryly funny) book. Nomadland is a testament both to the generosity and creativity of the victims of our modern-medieval economy, hidden in plain sight, and to the blunt-end brutality that put them there. Is this the best the wealthiest nation on earth can do for those who’ve already done so much?

— Rebecca Solnit, author of A Paradise Built in Hell

In the early twentieth century, men used to ride the rails in search of work, sharing camps at night. Today, as Bruder brilliantly reports, we have a new class of nomadic workers who travel in their RVs from one short-term job to another. There’s a lot to cringe at here—from low pay and physically exhausting work to constant insecurity. But surprisingly, Nomadland also offers its residents much-needed camaraderie and adventure, which makes this book a joy to read.

The campsite as the home of last resort, the RV used not for vacation but for survival: these are the makings of a new dystopia. Nomadland is a smart road book for the new economy, full of conviviality and dark portent.

You will never forget the people whose stories Bruder tells. Proud, resourceful, screwed-over, funny and in so many ways admirable, the American nomads Bruder lived with and reports on have sometimes lost everything but their bravado . . . . [She] tells their stories with humanity and wit.
— Louise Erdrich, author of Future Home of the Living God

Some readers will come because they're enamored of road narratives, but Bruder's study should be of interest to anyone who cares about the future of work, community, and retirement.
— Peter C. Baker - Pacific Standard

[A]
powerhouse of a book. . . . In the best immersive-journalism tradition, Bruder
records her

Jessica Bruder is an award-winning journalist whose work focuses on subcultures and the dark corners of the economy. She has written for Harper’s Magazine, the New York Times, and the Washington Post. Bruder teaches at the Columbia School of Journalism.
Loading...
or support indie stores by buying on