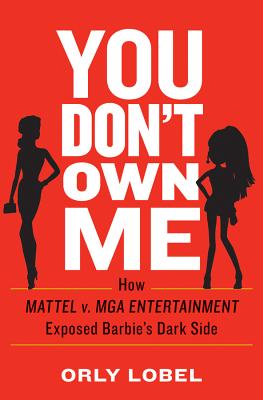 You Don't Own Me (Hardcover)

The battle between Mattel, the makers of the iconic Barbie doll, and MGA, the company that created the Bratz dolls, was not just a war over best-selling toys, but a war over who owns ideas.

When Carter Bryant began designing what would become the billion-dollar line of Bratz dolls, he was taking time off from his job at Mattel, where he designed outfits for Barbie. Later, back at Mattel, he sold his concept for Bratz to rival company MGA. Law professor Orly Lobel reveals the colorful story behind the ensuing decade-long court battle.

This entertaining and provocative work pits audacious MGA against behemoth Mattel, shows how an idea turns into a product, and explores the two different versions of womanhood, represented by traditional all-American Barbie and her defiant, anti-establishment rival—the only doll to come close to outselling her. In an era when workers may be asked to sign contracts granting their employers the rights to and income resulting from their ideas—whether conceived during work hours or on their own time—Lobel’s deeply researched story is a riveting and thought-provoking contribution to the contentious debate over creativity and intellectual property.

Orly Lobel is the Don Weckstein Professor of Law at the University of San Diego and received her doctoral and law degrees from Harvard University. When a child, she starred in her psychologist mother’s studies on playing with Barbies. The award-winning author of Talent Wants to Be Free, she lives in La Jolla, California.

Praise For You Don't Own Me: How Mattel v. MGA Entertainment Exposed Barbie's Dark Side…

It’s a big, complicated story . . . [but] Lobel doesn’t dumb the story down; she explains its complexities clearly and even elegantly. An outstanding business book.

In her crisp narrative, [Lobel] pauses to ponder Mattel’s notorious litigiousness and Barbie’s iconic history, which is illuminating and contains some eyebrow-raising factoids.

Impressive . . . a thoroughly researched book that explains the legalese of patent, property, and copyright law in layman’s terms while providing an entertaining narrative.

This book is a courtroom drama, a corporate expose, and a case study of cutthroat creativity. Orly Lobel deftly explains why ownership of ideas should belong to people, not companies.
— Adam Grant, New York Times best-selling author of Originals

A thrill ride through backstabbing competition, business strategies, and the marketing of the American icon Barbie. Who knew intellectual property law could be such a page turner? An amazing story and a great read.
— Jonah Berger, best-selling author of Contagious and Invisible Influence

A fascinating, insightful, and accessible book with relevance for entrepreneurship and business in general, for copyright law and the legal profession as a whole, for individual success and the success of our economy. It is both pleasure reading and mandatory reading.
— Tal Ben-Shahar, best-selling author of Happier

Orly Lobel takes the legal campaign that Mattel, the producer of the iconic Barbie, waged against MGA, maker of the upstart Bratz, and spins it into a tale that manages both to fascinate and to illuminate how over-reliance on intellectual property law can damage, rather than aid, innovation.
— Christopher Sprigman, author of The Knockoff Economy

Orly Lobel’s gripping You Don’t Own Me has all the ingredients of a great story: an upstart hero, an underdog that takes on a powerful top dog, and a string of unpredictable twists and turns that reveal how corporations and the courts determine who owns creative ideas. This is an important and insightful book that’s sure to inspire a heated debate.