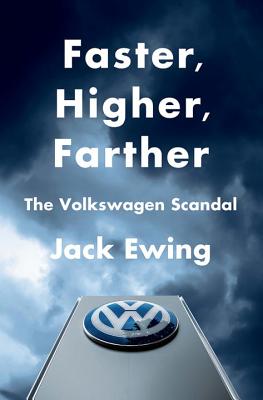 A shocking exposé of Volkswagen’s fraud by the New York Times reporter who covered the scandal.

In mid-2015, Volkswagen proudly reached its goal of surpassing Toyota as the world’s largest automaker. A few months later, the EPA disclosed that Volkswagen had installed software in 11 million cars that deceived emissions-testing mechanisms. By early 2017, VW had settled with American regulators and car owners for $20 billion, with additional lawsuits still looming. In Faster, Higher, Farther, Jack Ewing rips the lid off the conspiracy. He describes VW’s rise from “the people’s car” during the Nazi era to one of Germany’s most prestigious and important global brands, touted for being “green.” He paints vivid portraits of Volkswagen chairman Ferdinand Piëch and chief executive Martin Winterkorn, arguing that the corporate culture they fostered drove employees, working feverishly in pursuit of impossible sales targets, to illegal methods. Unable to build cars that could meet emissions standards in the United States honestly, engineers were left with no choice but to cheat. Volkswagen then compounded the fraud by spending millions marketing “clean diesel,” only to have the lie exposed by a handful of researchers on a shoestring budget, resulting in a guilty plea to criminal charges in a landmark Department of Justice case. Faster, Higher, Farther reveals how the succeed-at-all-costs mentality prevalent in modern boardrooms led to one of corporate history’s farthest-reaching cases of fraud—with potentially devastating consequences.

This will go down in history books as a great corporate scandal , but the story told by the New York Times reporter Jack Ewing…is also much more than that. It’s a rich history of a company whose cars, for better and worse, have touched millions of lives, a character study of a brilliant but deeply flawed leader, and a case study in how a corporate culture can turn toxic.

Faster, Higher, Farther: The Volkswagen Scandal takes readers through the combination of pressures that produced what may be the biggest corporate scandal ever, detailing the company’s personalities and the history behind the saga with fluency and wit.

A shocking and incredibly compelling exposé of one of the great corporate scandals of all time....reads like a fast-paced thriller.
— The Guardian

A damning indictment of corporate malfeasance and…an accessible account of one of the most expensive business mistakes ever recorded.
— Patrick McGee - Financial Times

A fascinating exposé....Ewing’s compelling prose makes his book read like entertainment more than education and the story of Volkswagen’s fall…is a study in corporate hubris.
— Publishers Weekly

It is a corporate scandal to rival Enron and Lehman Brothers....Ewing weaves a conspiratorial tale of corporate greed run amok. Capturing the public fascination with craven financial scandals, and with a movie in the works, Ewing’s sordid saga is the latest addition to the history of corporate fraud.
— Booklist (starred review)

A shocking, sobering story—and, given the current antiregulatory mood, one likely to be repeated.
— Kirkus

Meticulously chronicles ‘one of the greatest corporate scandals ever’.
— Library Journal

Jack Ewing has covered business and economics from Frankfurt for The New York Times since 2010. He has worked as a journalist in Germany since 1994, including over a decade as a BusinessWeek correspondent.
Loading...
or
Not Currently Available for Direct Purchase