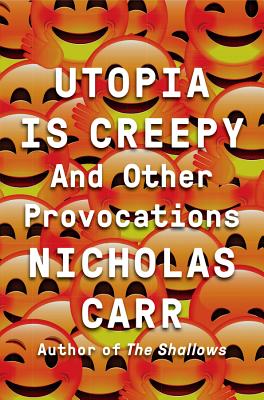 A freewheeling, sharp-shooting indictment of a tech-besotted culture.

With a razor wit, Nicholas Carr cuts through Silicon Valley’s unsettlingly cheery vision of the technological future to ask a hard question: Have we been seduced by a lie? Gathering a decade’s worth of posts from his blog, Rough Type, as well as his seminal essays, Utopia Is Creepy offers an alternative history of the digital age, chronicling its roller-coaster crazes and crashes, its blind triumphs, and its unintended consequences.

Carr’s favorite targets are those zealots who believe so fervently in computers and data that they abandon common sense. Cheap digital tools do not make us all the next Fellini or Dylan. Social networks, diverting as they may be, are not vehicles for self-enlightenment. And “likes” and retweets are not going to elevate political discourse. When we expect technologies—designed for profit—to deliver a paradise of prosperity and convenience, we have forgotten ourselves. In response, Carr offers searching assessments of the future of work, the fate of reading, and the rise of artificial intelligence, challenging us to see our world anew.

In famous essays including “Is Google Making Us Stupid?” and “Life, Liberty, and the Pursuit of Privacy,” Carr dissects the logic behind Silicon Valley’s “liberation mythology,” showing how technology has both enriched and imprisoned us—often at the same time. Drawing on artists ranging from Walt Whitman to the Clash, while weaving in the latest findings from science and sociology, Utopia Is Creepy compels us to question the technological momentum that has trapped us in its flow. “Resistance is never futile,” argues Carr, and this book delivers the proof.

Praise For Utopia Is Creepy: And Other Provocations…

Carr, a Pulitzer Prize finalist, takes on modern
life’s short attention spans and worship of the superficial in a . . . rapid-fire
volley of ideas deceptively designed to engage at a depth greater than 140
characters. By turns wry and revelatory, and occasionally maddening, Carr
succeeds at shaking the reader out of screen-zombie complacency.
— Discover Magazine

[F]ull of wry vignettes and articles lampooning
the motivated enthusiasm and game-changing promises of Silicon Valley’s tech
bro elite… by turns cute, funny or chilling. And it’s more than the sum of its
parts.
— Sally Adee - New Scientist

Carr’s best hits for those who missed the last
decade of his stream of thoughtful commentary about our love affair with
technology and its effect on our relationships.
— Richard Cytowic - New York Journal of Books

Bright, fun, telling. . . . A collection that reminds us that critical thinking is the best way to view the mixed blessings of rampant technology. A treat for Carr fans.
— Kirkus Reviews (Starred Review)

This highly browsable collection will hold great
appeal for anyone interested in the social aspects of technology, from tech
lovers to pre-Internet nostalgists.
— Library Journal

Nicholas Carr is the author of The Shallows, a Pulitzer Prize finalist, The Glass Cage, and Utopia is Creepy. He has written for the New York Times, the Wall Street Journal, Atlantic, and Wired. He lives in Massachusetts with his wife.
Loading...
or
Not Currently Available for Direct Purchase