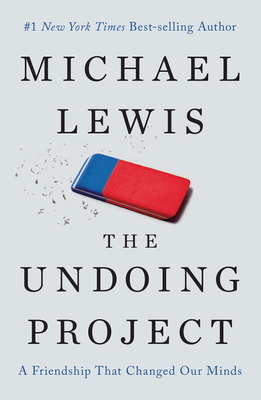 A Friendship That Changed Our Minds

How a Nobel Prize–winning theory of the mind altered our perception of reality.

Forty years ago, Israeli psychologists Daniel Kahneman and Amos Tversky wrote a series of breathtakingly original studies undoing our assumptions about the decision-making process. Their papers showed the ways in which the human mind erred, systematically, when forced to make judgments in uncertain situations. Their work created the field of behavioral economics, revolutionized Big Data studies, advanced evidence-based medicine, led to a new approach to government regulation, and made much of Michael Lewis’s own work possible. Kahneman and Tversky are more responsible than anybody for the powerful trend to mistrust human intuition and defer to algorithms.

The Undoing Project is about a compelling collaboration between two men who have the dimensions of great literary figures. They became heroes in the university and on the battlefield—both had important careers in the Israeli military—and their research was deeply linked to their extraordinary life experiences. Amos Tversky was a brilliant, self-confident warrior and extrovert, the center of rapt attention in any room; Kahneman, a fugitive from the Nazis in his childhood, was an introvert whose questing self-doubt was the seedbed of his ideas. They became one of the greatest partnerships in the history of science, working together so closely that they couldn’t remember whose brain originated which ideas, or who should claim credit. They flipped a coin to decide the lead authorship on the first paper they wrote, and simply alternated thereafter.

This story about the workings of the human mind is explored through the personalities of two fascinating individuals so fundamentally different from each other that they seem unlikely friends or colleagues. In the process they may well have changed, for good, mankind’s view of its own mind.

Praise For The Undoing Project: A Friendship That Changed Our Minds…

Lewis is the ideal teller of [Tversky and Kahneman’s] story… You see his protagonists in three dimensions—deeply likable, but also flawed, just like most of your friends and family.
— David Leonhardt - New York Times Book Review

Brilliant… Lewis has given us a spectacular account of two great men who faced up to uncertainty and the limits of human reason.
— William Easterly - Wall Street Journal

Compelling… The Undoing Project is a history of the birth of behavioral economics, but it’s also Lewis’s testament to the power of collaboration.

Michael Lewis has a genius for finding stories about people who view reality from an unusual angle and telling these stories in a compulsively readable way.
— Geoffrey Kabat - Forbes

Lewis [is a] master of the character-driven narrative.
— Charlie Gofen - The National Book Review

Tantalizing and tender… Lewis is an irresistible storyteller and a master at illuminating complicated and fascinating subjects.
— Booklist, starred review