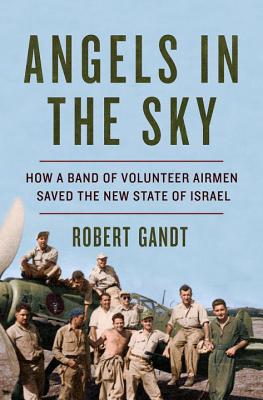 Angels in the Sky

The gripping story of how an all-volunteer air force helped defeat five Arab nations and protect the fledgling Jewish state.

In 1948, only three years after the Holocaust, the newly founded nation of Israel came under siege from a coalition of Arab states. The invaders vowed to annihilate the tiny country and its 600,000 settlers. A second Holocaust was in the making.

Outnumbered sixty to one, the Israelis had no allies, no regular army, no air force, no superpower to intercede on their behalf. The United States, Great Britain, and most of Europe enforced a strict embargo on the shipment of arms to the embattled country. In the first few days, the Arab armies overran Israel. The Egyptian air force owned the sky, making continuous air attacks on Israeli cities and army positions. Israel’s extinction seemed certain.

And then came help. From the United States, Canada, Britain, France, South Africa arrived a band of volunteer airmen. Most were World War II veterans—young, idealistic, swaggering, noble, eccentric, courageous beyond measure. Many were Jews, a third were not. Most of them knowingly violated their nations’ embargoes on the shipment of arms and aircraft to Israel. They smuggled in Messerschmitt fighters from Czechoslovakia, painting over swastikas with Israeli stars. Defying their own countries’ strict laws, the airmen risked everything—their lives, careers, citizenship—to fight for Israel.

They were a small group, fewer than 150. In the crucible of war they became brothers in a righteous cause. They flew, fought, died, and, against all odds, helped save a new nation. The saga of the volunteer airmen in Israel’s war of independence stands as one of the most stirring—and untold—war stories of the past century.


Praise For Angels in the Sky: How a Band of Volunteer Airmen Saved the New State of Israel…

An excellent nonfiction choice for aficionados of military thrillers. General readers seeking an accessible history of the Israeli war of independence will also enjoy.
— Library Journal

Compelling….both an exciting account of aerial combat as well as a frequently touching collection of warrior profiles.
— Booklist

Angels in the Sky reads like a World War II thriller, only better because every word is true. The saga of Israel’s fledgling air force and the motley crew of heroes who saved the Jewish state is one of the great untold stories of history. Robert Gandt has brought it vividly, unforgettably to life.

In 1948 a group of ragtag aerial warriors from the four corners of the earth helped save the newborn state of Israel from the armed forces of five Arab states—a David facing Goliath. Improbably, Israel won the war in a miraculous military victory. Books like Angels in the Sky come along once in a generation. You must read it.

These are the forgotten ‘Flying Tigers’ who stepped forward when the world turned away, to fly and fight for the highest stakes—the survival of Israel. A cinematic mélange of heart-pounding history, Angels in the Sky does justice to an epic, unsung story.

It is always so rewarding to read a book about combat flying written by an author who obviously knows the subject firsthand! Robert Gandt’s latest book on the infant Israeli Air Force fills a real need and shines new light on one of the most heroic battles in history. The prowess of the IAF in recent years has caused us to forget just how precarious was its beginning, and how joyfully the battle was joined by a wide variety of pilots flying airplanes better suited for a museum than combat.
— Walter Boyne, former director of the Smithsonian Air & Space Museum

Bob Gandt understands pilots and he understands flying, which are not always the same thing. Angels in the Sky is…an enjoyable, balanced description of the origin of one of the world’s leading air forces. Strap in tight, turn up the oxygen, and set the gunsight for ‘pegged range’ because it’s a wild ride.

Angels in the Sky is the best of Bob Gandt. He details the extreme measures that were required to get aircraft out of the United States, Britain and other countries and into Israel in 1948. But more importantly, he gives life to the aircraft buyers, mechanics and pilots that were to make up what would become one of the most formidable air forces in the world. Bob shows us the joy, sorrow, comradeship and trust that was shared by the foreign and Jewish members of the group. A terrific read for anyone.

Robert Gandt is a former Navy fighter pilot, international airline captain, and the award-winning author of sixteen books on aviation and military subjects. He lives in Daytona Beach, Florida.
Loading...
or
Not Currently Available for Direct Purchase