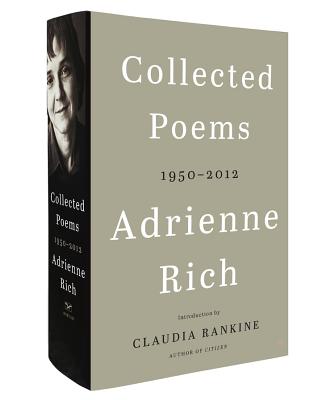 The collected works of Adrienne Rich, whose poetry is "distinguished by an unswerving progressive vision and a dazzling, empathic ferocity" (New York Times). A Finalist for the 2017 Pulitzer Prize in Poetry.

Adrienne Rich was the singular voice of her generation and one of our most important American poets. She brought discussions of gender, race, and class to the forefront of poetical discourse, pushing formal boundaries and consistently examining both self and society.

This collected volume traces the evolution of her poetry, from her earliest work, which was formally exact and decorous, to her later work, which became increasingly radical in both its free-verse form and feminist and political content. The entire body of her poetry is on display in this vast volume, including the National Book Award–winning Diving Into the Wreck and her prize-winning Atlas of the Difficult World.

The Collected Poems of Adrienne Rich gathers and memorializes all of her boldly political, formally ambitious, thoughtful, and lucid work, the whole of which makes her one of the most prolific and influential poets of our time.

Adrienne Rich’s poetry travels multiple paths through the human conditions of love, gender, and history. Always keenly focused, she names social and psychological infractions without sacrificing the search for lyrical and imagistic harmony. Feeling and knowing the true registers of experience, Rich never gives up on the quest for equality and justice. Collected Poems connects the poet’s formal and experimental ethos, and we are gifted a magnum opus of poetic inquiry for the twenty-first century.

Adrienne Rich (1929–2012) was an award-winning poet, influential essayist, radical feminist, and major public intellectual of the twentieth and twenty-first centuries. She wrote two dozen volumes of poetry, including the National Book Award–winning Diving into the Wreck, and more than a half-dozen of prose.
Loading...
or
Not Currently Available for Direct Purchase