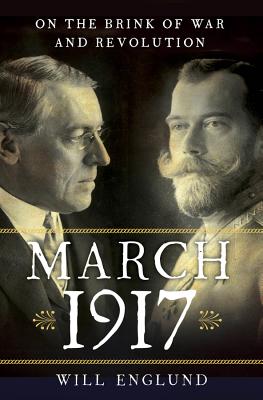 On the Brink of War and Revolution

A riveting history of the month that transformed the world’s greatest nations as Russia faced revolution and America entered World War I.

“We are provincials no longer,” declared Woodrow Wilson on March 5, 1917, at his second inauguration. He spoke on the eve of America’s entrance into World War I, just as Russia teetered between autocracy and democracy. In the face of chaos and turmoil in Europe, Wilson was determined to move America away from the isolationism that had defined the nation’s foreign policy since its inception and to embrace an active role in shaping world affairs.

Just ten days later, Tsar Nicholas II abdicated the Russian throne, ending a three-centuries-long dynasty and plunging his country into a new era of uncertainty, ultimately paving the way for the creation of a Soviet empire.

Within a few short weeks, at Wilson’s urging, Congress voted to declare war on Germany, asserting the United States’ new role as a global power and its commitment to spreading American ideals abroad. Yet at home it remained a Jim Crow nation, and African Americans had their own struggle to pursue. American women were agitating for the vote and a greater role in society, and labor strife was rampant. As a consequence of the war that followed, the United States and Russia were to endure a century of wariness and hostility that flickers and flares to this day.

March 1917 reexamines these tumultuous events and their consequences in a compelling new analysis. Drawing on a wealth of contemporary Russian and American diaries, memoirs, oral histories, and newspaper accounts, Pulitzer Prize–winning journalist Will Englund creates a highly detailed and textured account of the month that transformed the world’s greatest nations. March 1917 considers the dreams of that year’s warriors, pacifists, activists, revolutionaries, and reactionaries, and demonstrates how their successes and failures constitute the origin story of our complex modern world.


Praise For March 1917: On the Brink of War and Revolution…

A detailed account of one month that shaped history.


Offers fascinating details about nations on the brink of war.
— Dan Rodricks

One of the most delightful [books] I have ever read on the subject. Mr. Englund is a very talented writer of vast experience.
— G. Jefferson Price III, Baltimore Sun

This book nicely details both the political arena and the submerged social currents. It also adds to the knowledge base about this time period....Recommended for those eager to learn about watershed moments in history and all readers interested in World War I.

Englund is an accomplished storyteller, and he captures well the spirit of the time.

Despite the plethora of books on WWI, Englund....crafts a novel and persuasive point of entry into the topic, focusing on the pivotal month of March 1917....[he] delivers a satisfying, well written, and well timed work.

Pulitzer, Polk, and Overseas Press Club Award–winning journalist Will Englund was a recent Moscow correspondent for The Washington Post and has spent a total of twelve years reporting from Russia. He now lives in Baltimore, Maryland.
or
Not Currently Available for Direct Purchase