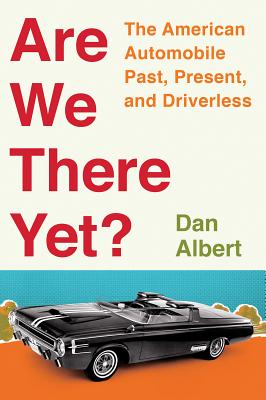 Are We There Yet?

The American Automobile Past, Present, and Driverless

Tech giants and automakers have been teaching robots to drive.

Robot-controlled cars have already logged millions of miles. These technological marvels promise cleaner air, smoother traffic, and tens of thousands of lives saved. But even if robots turn into responsible drivers, are we ready to be a nation of passengers?

In Are We There Yet?, Dan Albert combines historical scholarship with personal narrative to explore how car culture has suffused America’s DNA. The plain, old-fashioned, human-driven car built our economy, won our wars, and shaped our democratic creed as it moved us about. Driver’s ed made teenagers into citizens; auto repair made boys into men.

Crusades against the automobile are nothing new. Its arrival sparked battles over street space, pitting the masses against the millionaires who terrorized pedestrians. When the masses got cars of their own, they learned to love driving too. During World War II, Washington nationalized Detroit and postwar Americans embraced car and country as if they were one. Then came 1960s environmentalism and the energy crises of the 1970s. Many predicted, even welcomed, the death of the automobile. But many more rose to its defense. They embraced trucker culture and took to Citizen Band radios, demanding enough gas to keep their big boats afloat. Since the 1980s, the car culture has triumphed and we now drive more miles than ever before.

Have we reached the end of the road this time? Fewer young people are learning to drive. Ride hailing is replacing car buying, and with electrification a long and noble tradition of amateur car repair—to say nothing of the visceral sound of gasoline exploding inside a big V8—will come to an end. When a robot takes over the driver’s seat, what’s to become of us?

Are We There Yet? carries us from muddy tracks to superhighways, from horseless buggies to driverless electric vehicles. Like any good road trip, it’s an adventure so fun you don’t even notice how much you’ve learned along the way.


Praise For Are We There Yet?: The American Automobile Past, Present, and Driverless…

[Dan Albert] is an automotive historian of the highest caliber…Weaving together data points and anecdotes from over a century of material while covering aspects of the automobile as diverse as engine cooling and urban renewal takes extraordinary craft, and Are We There Yet? pulls it off in style.

Dan Albert is a unique voice in American letters—a historian of the car and its culture with a driver’s passion and a sense of the absurd. His wise, funny, erudite tour of the American car and road is part memoir, part history, part polemic. All of it is necessary. It’s like taking a long drive through the twentieth century with someone who can actually identify the sights.
— Keith Gessen, author of A Terrible Country

From Henry Ford to Elon Musk, from seat belts to self-driving cars, Dan Albert takes us on a kaleidoscopic tour of the automobile’s evolution, showing us how the future of transportation cannot be understood without investigating the past.
— Nathan Bomey, author of Detroit Resurrected: To Bankruptcy and Back

Written in a witty and infectious style, Are We There Yet? is a briskly paced guided tour of the economic, political, geographic, environmental, and aspirational influences cars have had on Americans, and vice versa. Dan Albert makes this history interesting and relevant in its own right while showing how it bears directly on the most recent automotive frontier: the much-anticipated driverless car. He reminds us how fundamentally intertwined the automobile, the built environment, and human nature have been, and that they will remain so for the foreseeable future.

[Are We There Yet?] provides a witty history of the automobile and a look at the future…an entertaining exploration of American vehicle culture and American culture in general.

An extremely engaging work of narrative nonfiction for those who enjoy popular historical and technology reads.
— Library Journal (starred review)

Dan Albert holds a PhD in history from the University of Michigan. He writes about the past, present, and future of cars for n + 1 magazine.
Loading...
or support indie stores by buying on