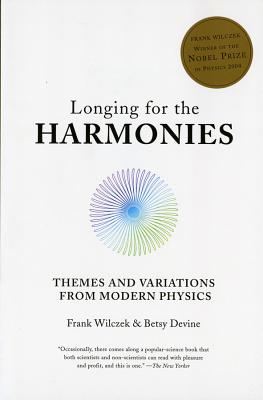 Longing for the Harmonies

Themes and Variations from Modern Physics

"Occasionally, there comes along a popular science book that both scientists and non-scientist can read with pleasure and profit, and this is one."—The New Yorker

Devoted to sharing their own delight and awe before the fundamental mysteries of the cosmos, Frank Wilczek (winner of the 2004 Nobel Prize in Physics) and science writer Betsy Devine also have a serious purpose: to reveal to the lay reader how a heightened perception can respond to timeless themes of the physical universe. For example, they show that even the most exotic theories always confirm that physical laws are precisely the same throughout the universe, and they explain how we have learned that the most massive molten stars and the tiniest frozen particles are in physical harmony. In their descriptions of the workings of the half-known universe, Wilczek and Devine bring all of us face to face with the beauty of eternal order and the inevitability of rational ends and beginnings.

Frank Wilczek is a theoretical physicist. He has won many awards for his contributions to physics, including the 2004 Nobel Prize, and also for his writing. He is currently Herman Feshbach Professor of Physics at MIT.

Betsy Devine writes about science and humor.
Loading...
or
Not Currently Available for Direct Purchase