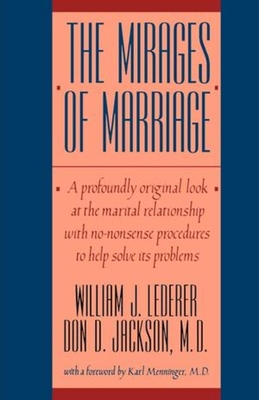 The Mirages of Marriage

“We believe that husband and wife in a discordant marriage can do the greater part of the healing and growing for themselves. There is no doctor or counselor who can—for any amount of money—give ‘instant’ love or marital harmony. The partners involved must do the work.” —William J. Lederer and Don D. Jackson, M.D.

This helpful, incisive analysis of marriage in America discusses the false assumptions of modern marriage and how to make a marriage work. It is imperative to realize, the authors argue, that the marital relationship is an interlocked system in itself, not a function of individual partners. They offer techniques for appraising one’s own marriage, discuss the use of counselors and the dangers of unilateral therapy, and outline the major elements of a satisfactory marriage.

William J. Lederer (1912-2009) was was a former U.S. Navy captain and the co-author of The Ugly American (with Eugene Burdick), The Mirages of Marriage (with Don D. Jackson), and other books.

The late Don D. Jackson was a founder and director of the Mental Research Institute in Palo Alto, California, and associate professor at the Stanford University School of Medicine. He was coauthor, with Paul Wazlawick and Janet Beavin Bavelas, of Pragmatics of Human Communication.
Loading...
or support indie stores by buying on