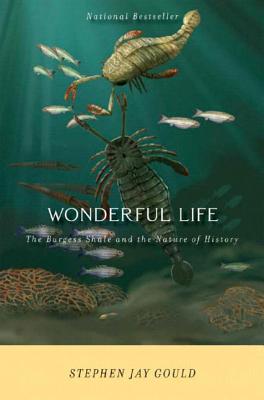 The Burgess Shale and the Nature of History

"[An] extraordinary book. . . . Mr. Gould is an exceptional combination of scientist and science writer. . . . He is thus exceptionally well placed to tell these stories, and he tells them with fervor and intelligence."—James Gleick, New York Times Book Review

High in the Canadian Rockies is a small limestone quarry formed 530 million years ago called the Burgess Shale. It hold the remains of an ancient sea where dozens of strange creatures lived—a forgotten corner of evolution preserved in awesome detail. In this book Stephen Jay Gould explores what the Burgess Shale tells us about evolution and the nature of history.


Praise For Wonderful Life: The Burgess Shale and the Nature of History…

There is no question about the historical importance of the Burgess Shale, and Gould is right when he says that it deserves a place in the public consciousness along with big bangs and black holes. . . . A compelling story, told with characteristic verve.
— Richard A. Fortey - Nature

Gould at his best. . . . The message of history is superbly conveyed. . . . Recommended reading for scientists and nonscientists of all persuasions.
— Walter C. Sweet - Science

Stephen Jay Gould (1941-2002) was the Alexander Agassiz Professor of Zoology and Professor of Geology at Harvard University. He published over twenty books, received the National Book and National Book Critics Circle Awards, and a MacArthur Fellowship.
Loading...
or support indie stores by buying on