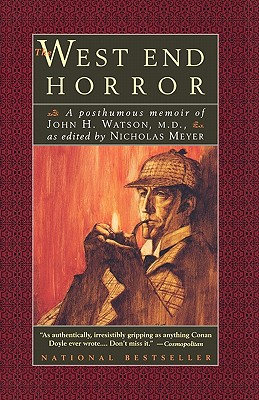 "As authentically, irresistibly gripping as anything Conan Doyle ever wrote…Don't miss it." —Cosmopolitan

March 1895. London. A month of strange happenings in the West End. First there is the bizarre murder of theater critic Jonathan McCarthy. Then the lawsuit against the Marquess of Queensberry for libel; the public is scandalized. Next, the ingenue at the Savoy is discovered with her throat slashed. And a police surgeon disappears, taking two corpses with him.

Some of the theater district's most fashionable and creative luminaries have been involved: a penniless stage critic and writer named Bernard Shaw; Ellen Terry, the gifted and beautiful actress; a suspicious box office clerk named Bram Stoker; an aging matinee idol, Henry Irving; an unscrupulous publisher calling himself Frank Harris; and a controversial wit by the name of Oscar Wilde.

Scotland Yard is mystified by what appear to be unrelated cases, but to Sherlock Holmes the matter is elementary: a maniac is on the loose. His name is Jack.

Beguiling and convincing entertainment, an audacious novelty that should set members of the Baker Street Irregulars and even less fanatical collectors of Holmes to dancing.
— San Francisco Chronicle

I hope Nicholas Meyer never stops writing Sherlock Holmes pastiches because he does it so much better than anyone else.
— The New Republic

Nicholas Meyer is the author of four Sherlock Holmes novels, including The Adventure of the Peculiar Protocols and The Seven-Per-Cent Solution, which was on the New York Times bestseller list for a year. He's a screen-writer and film director, responsible for The Day After, Time After Time, as well as Star Trek II: The Wrath of Khan, Star Trek IV: The Voyage Home, and Star Trek VI: The Undiscovered Country among many others. A native of New York City, he lives in Santa Monica, California.
Loading...
or support indie stores by buying on