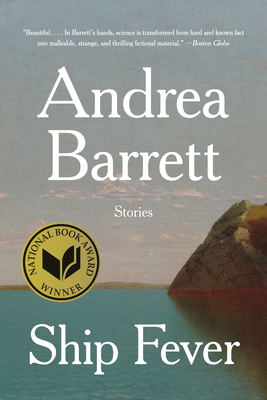 The elegant short fictions gathered hereabout the love of science and the science of love are often set against the backdrop of the nineteenth century. Interweaving historical and fictional characters, they encompass both past and present as they negotiate the complex territory of ambition, failure, achievement, and shattered dreams. In "Ship Fever," the title novella, a young Canadian doctor finds himself at the center of one of history's most tragic epidemics. In "The English Pupil," Linnaeus, in old age, watches as the world he organized within his head slowly drifts beyond his reach. And in "The Littoral Zone," two marine biologists wonder whether their life-altering affair finally was worth it. In the tradition of Alice Munro and William Trevor, these exquisitely rendered fictions encompass whole lives in a brief space. As they move between interior and exterior journeys, "science is transformed from hard and known fact into malleable, strange and thrilling fictional material" (Boston Globe).

Beautiful stories about the wonder and work of science…In Barrett’s hands, science is transformed from hard and known fact into malleable, strange, and thrilling fictional material.
— Boston Globe

The title novella is devastating: as with every story here, you enter right into it, and cannot entirely leave it behind.
— The New Yorker

Andrea Barrett is the author of The Air We Breathe, Servants of the Map (finalist for the Pulitzer Prize), The Voyage of the Narwhal, Ship Fever (winner of the National Book Award), and other books. She teaches at Williams College and lives in northwestern Massachusetts.

In any story collection, the order of the stories is purposeful and meant to evoke certain connections and rhythms in the reader. How are the stories in Ship Fever arranged? How does that order influence your reading of the book as a whole?

Scientists are often stereotyped as purely rational beings, working at something cerebral and abstract without being subject to human passions. Did you gain a different view of scientists from reading the book? How do you think ambition, vanity, loneliness, and desire shape the course of science?

Why might Barrett have chosen to focus largely on characters who don’t (at least in worldly terms) succeed at their chosen endeavors? What is she saying about sticking with the values and people we love?

The 19th-century geneticist Gregor Mendel plays a crucial role in “The Behavior of the Hawkweeds.” Why might Barrett have chosen to tell that story in the voice of a 20th-century woman only peripherally connected to Mendel and his work, rather than in the voice of Mendel himself, or of a scientist directly working with Mendel’s theories?

From what point of view do we see Jonathan and Ruby in “The Littoral Zone”? Does the point of view create equal sympathy for both characters? How do the children in the story feel about their parents’ choices?

Sarah Anne, in “Rare Bird,” is a woman who would likely have a career in science if she lived now. What does this story say about the ways roles for women in traditionally male pursuits have—and haven’t —changed since then?

What purpose is served by the intertwining of Zaga’s personal life, and the encounter of Darwin and Jemmy Button, in “Soroche”?

How does the story of Jemmy Button illuminate aspects of Zaga’s experience that she, and we, might not otherwise grasp?

In “Birds with No Feet” the off-stage character who influences most of the action is a real person, the famous evolutionary biologist Alfred Wallace. The central character, Alec Carriere, is a fictional creation, a shadow-version of Wallace with Wallace’s desires and ambitions and perhaps even talent, but without his good fortune. How is the story changed by focusing on Carriere rather than Wallace? How does Carriere come to view the course of his life, which has been driven by his obsessions?

The plural first-person voice of “The Marburg Sisters” —the “we” that is sometimes both sisters, sometimes Bianca, sometimes Rose—is uncommon in fiction. Does this make the story difficult to read? What does it imply about the sisters’ intimacy and fused vision that couldn’t be conveyed by simple description?

Why do you think Rose has been able to make a successful career for herself in science, while Bianca has given it up? What do you see each sister as gaining or losing by her choices?

“Ship Fever” explores what happened to a large group of Irish men and women fleeing a famine in their own country and hoping to make a new life in Canada. Do you see any parallels between what happened to them, in 1847, and what happens to refugees arriving in the United States now?

What initially drives Dr. Lauchlin Grant to the quarantine station on Grosse Isle? How does Lauchlin’s character grow and change over the course of “Ship Fever”? How do his contacts with Nora Kynd and the other Irish emigrants alter his view of the world?

A romantic triangle—Lauchlin, Susannah, Arthur Adam—plays a role in “Ship Fever,” but it’s in the background. If the fate of the Irish emigrants is in the foreground, what is the function of the small, quiet love story? What might it mean when Lauchlin, ill near the end of the tale, confuses Nora and Susannah?

Several sections of “Ship Fever” are devoted to the impressions of Annie Taggert, who works as a housemaid for the Rowleys. Since Annie has no obvious connection either to what’s going on at Grosse Isle, or to the personal relationships of the major characters, why do you think Barrett has given her this active role? What does Annie convey about the situation that we wouldn’t otherwise know?

Although Nora can’t read at the beginning of “Ship Fever,” she brings with her from Ireland a knowledge of traditional medicine that proves to be useful, and possibly influences the course of the epidemic on the island. What do you think Barrett is trying to say about the intersection here of “professional” and “amateur” science? What does Nora take with her, when she leaves the island for her new life?

What role do the various politicians, charity workers, and professional journalists (such as Arthur Adam Rowley) play in the fate of the Irish people caught first in the famine at home and then in the epidemic at Grosse Isle? What role do they play now, in similar situations?