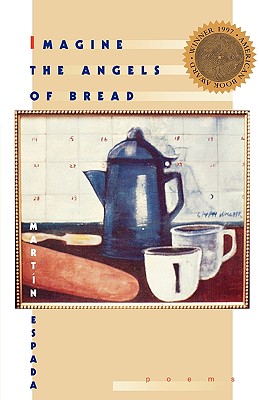 Imagine the Angels of Bread

Combining the personal with the political in his fifth collection, Martín Espada celebrates the bread of the imagination, the bread of the table, and the bread of justice. The heart of the collection is a series of autobiographical poems recalling family, school, neighborhood, and work experiences-from bouncer to tenant lawyer. There are moments of revelation and political transcendence here, which culminate in an elegy for the Puerto Rican poet Clemente Soto Velez, imprisoned for his advocacy of independence for Puerto Rico.


Praise For Imagine the Angels of Bread: Poems…

Martín Espada is well on his way to becoming the Latino poet of his generation.
— Earl Shorris

Martín Espada has published more than twenty books as a poet, editor, essayist and translator, including Vivas to Those Who Have Failed and Pulitzer finalist The Republic of Poetry. His many honors include the Ruth Lilly Prize, the Shelley Memorial Award, and a Guggenheim Fellowship. Born in Brooklyn, he now lives in western Massachusetts.
Loading...
or support indie stores by buying on