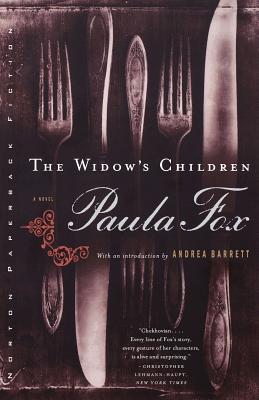 "Chekhovian. . . . Every line of Fox's story, every gesture of her characters, is alive and surprising."—Christopher Lehmann-Haupt, New York Times

On the eve of their trip to Africa, Laura Maldonada Clapper and her husband, Desmond, sit in a New York City hotel room, drinking scotch-and-sodas and awaiting the arrival of three friends: Clara Hansen, Laura's timid, brow-beaten daughter from a previous marriage; Carlos, Laura's flamboyant and charming brother; and Peter Rice, a melancholy editor whom Laura hasn't seen for over a year. But what begins as a bon voyage party soon parlays into a bitter, claustrophobic clash of family resentment. From the hotel room to the tony restaurant to which the five embark, Laura presides over the escalating innuendo and hostility with imperial cruelty, for she is hiding the knowledge that her mother, the family matriarch, has died of a heart attack that morning. A novel as intense as it is unerringly observed, The Widow's Children is another revelation of the storyteller's art from the incomparable Paula Fox.


Praise For The Widow's Children: A Novel…

Paula Fox (1923—2017) was the author of Desperate Characters, The Widow’s Children, A Servant’s Tale, The God of Nightmares, Poor George, The Western Coast, and Borrowed Finery: A Memoir, among other books.

Andrea Barrett is the author of nine previous works of fiction, including the National Book Award–winning Ship Fever and Pulitzer Prize finalist Servants of the Map. She is the recipient of a MacArthur Fellowship, a Guggenheim Fellowship, and an NEA Fellowship, as well as a finalist for the Story Prize and a recipient of the Rea Award for the Short Story. Having lived in Rochester, New York, and western Massachusetts, Barrett now resides in the Adirondacks.
Loading...
or support indie stores by buying on