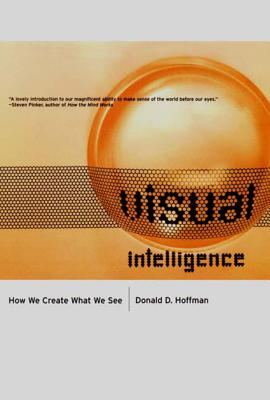 How We Create What We See

"Don Hoffman . . . combines a deep understanding of the logic of perception, a gift for explaining it with simple displays that anyone can-quite literally-see, and a refreshing sense of wonder at the miracle of it all."--Steven Pinker, author of How the Mind Works

Cognitive scientist Donald Hoffman's exploration of the extraordinary creative genius of the mind's eye "has many virtues, of which sheer intellectual excitement is the foremost" (Nature). Hoffman explains that far from being a passive recorder of a preexisting world, the eye actively constructs every aspect of our visual experience. In an informal style replete with illustrations, Hoffman presents the compelling scientific evidence for vision's constructive powers, unveiling a grammar of vision - a set of rules that govern our perception of line, color, form, depth, and motion. Hoffman also describes the loss of these constructive powers in patients such as an artist who can no longer see or dream in color and a man who sees his father as an impostor. Finally, Hoffman explores the spinoffs of visual intelligence in the arts and technology, from film special effects to virtual reality. This is, in sum, "an outstanding example of creative popular science" (Publishers Weekly).

Donald Hoffman is professor of cognitive science at the University of California, Irvine. His writing has appeared in Scientific American and Edge, and his work has been featured in the Atlantic, Wired, and Quanta. He resides in Irvine, California.
Loading...
or support indie stores by buying on