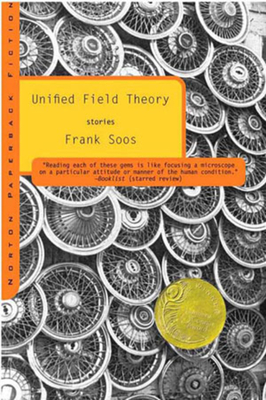 Unified Field Theory captures people in the middle of their lives on the verge of change. It is a moment when things are almost willing themselves to fall apart. Jobs, marriages, and hopes disintegrate under people while they seek answers and strategies, sometimes in omens or Buddhism, sometimes in reaching out to others. While some look for something larger than themselves, others get in their cars and drive as if motion alone might offer a solution.

In "Nickerson's Luck" the loss of a hubcap and its eventual reappearance shape a man's relationship to his almost ex-wife and the waitress he dates. In "Unified Field Theory", a warehouseman sees the world as a place where human relations overcome the theories of physics: planes stay airborne by an act of collective concentration, and the bonds of love are stronger than atomic bonds. All of Frank Soos's characters are deeply layered, engaged thoughtfully in complicated lives.