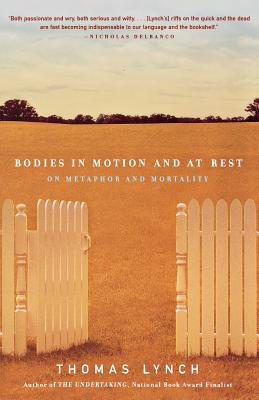 Bodies in Motion and at Rest

On Metaphor and Mortality

A Los Angeles Times Best Book of the Year

Masterful essays that illuminate not only how we die but also how we live.

Thomas Lynch, poet, funeral director, and author of the highly praised The Undertaking, winner of an American Book Award and finalist for the National Book Award, continues to examine the relations between the "literary and mortuary arts."


Praise For Bodies in Motion and at Rest: On Metaphor and Mortality…

Lynch brings a vast accumulation of life-and-death wisdom to the table, and he makes connections between art and mortality that reverberate in the mind. Few readers will walk away from this volume less than stunned and grateful.
— Jay Parini

Lynch shows himself to be a master of the essay…[he] speaks eloquently in the voice of both poet and undertaker.
— New York Times Book Review

Lynch writes beautifully and arrestingly about death because he seems to know so much about life.
— Elle

If the personal essay as a form seems especially vital today, if it seems more congruent than other literary forms to everyday life—and if capturing the everyday life that we find in essays seems more worthwhile than ever before, a challenge befitting a genuine hero of consciousness—Thomas Lynch is one of the first we have to thank.
— Salon

[Lynch] demonstrates once again his quizzical, gently cantankerous, free-minded Yeatsian charm. As he comments on the big and the small things of life, Mr. Lynch engages the reader with a mixture of poetic and funerary elements, of ephemera and durables both…his voice is rich and generous.
— Richard Bernstein - New York Times

Lynch has his finger on the bloody pulse of creation, and what makes him such a fine essayist is that it's just the business of everyday life and death to him.
— Los Angeles Times

Thomas Lynch’s stories, poems, and essays have appeared in Granta, the Atlantic, Harper’s, the New York Times, and elsewhere. His first collection of essays, The Undertaking, was a finalist for the National Book Award. Lynch lives in Milford, Michigan.
Loading...
or support indie stores by buying on