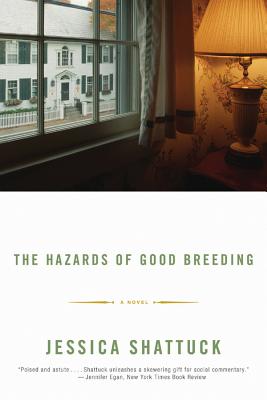 The Hazards of Good Breeding

The "pitch perfect" (Los Angeles Times) first novel by the New York Times bestselling author of The Women in the Castle.

This "richly appointed and generously portrayed" (Kirkus Reviews) debut novel tells the story of a WASPy, old-Boston family coming face to face with an America much larger than the one it was born in. Told from five perspectives, the novel spans an explosive week in the life of the Dunlaps, culminating in a series of events that will change their way of life forever.

Caroline Dunlap has written off the insular world of the Boston deb parties, golf club luaus, and WASP weddings that she grew up with. But when she reluctantly returns home after her college graduation, she finds that not everything is quite as predictable, or protected, as she had imagined. Her father, the eccentric, puritanical Jack Dunlap, is carrying on stoically after the breakup of his marriage, but he can't stop thinking of Rosita, the family housekeeper he fired almost six months ago. Caroline's little brother, Eliot, is working on a giant papier-mâché diorama of their town—or is he hatching a plan of larger proportions?

As the real reason for Rosita's departure is revealed, the novel culminates in a series of events that assault the fragile, sheltered, and arguably obsolete world of the Dunlaps.

Opening a window into a family's repressed desires and fears, The Hazards of Good Breeding is a startlingly perceptive comedy of manners that heralds a new writer of dazzling talent.

A New York Times Notable Selection and a Boston Globe Book of the Year.

Praise For The Hazards of Good Breeding: A Novel…

Shattuck is a wonderful writer. Her domestic interiors and etched portraits of 'Bostonus erectus' evoke the surface of Vermeer, the gentle bite of Austen…A gracefully choreographed novel that shines a sharp, clear light on a dying world and brings it to vivid life.
— Boston Globe

[With a] keen understanding of human nature and frailty [Shattuck] often displays a magnetic use of detail that not only makes her scenes come visually alive but also illuminates character.
— San Francisco Chronicle

Jessica Shattuck has written a thoughtful and elegant first novel, full of insight and humor. It is set in a rarefied world, one that she knows intimately and reveals perceptively; one which, for all its flaws and eccentricities, she loves.
— Roxana Robinson

With great skill and wisdom Jessica Shattuck weaves an intricate domestic web that highlights the most vulnerable threads in a myriad of relationships: parents, children, friends, and lovers. The Hazards of Good Breeding is all that the title promises and more. It is a terrific debut by a talented writer.

An excellent novel…The author avoids contrivance in presenting sensitive issues experienced by totally credible, thoughtful people and comes up with a new understanding of American life every bit as affecting as Richard Yates’s Revolutionary Road.

With her sharp eye for detail and witty, winning prose, Jessica Shattuck takes the familiar story of a high-WASP family’s demise and turns it on its head. There are at least fifteen certifiable pleasures in every paragraph of this charming, intelligent, exceedingly well-crafted debut.
— Helen Shulman

The Hazards of Good Breeding is a stunning first novel…In this midsummer night’s dream of a story, her themes of social disintegration and search for responsibility are playfully worked to reveal an endgame of moving redemption.

Jessica Shattuck is the New York Times bestselling author of The Women in the Castle, The Hazards of Good Breeding (a New York Times Notable Book and finalist for the PEN/Winship Award), and Perfect Life. Her writing has appeared in the New York Times, The New Yorker, Glamour, Mother Jones, and Wired among others. A graduate of Harvard University, she received her MFA from Columbia University. Shattuck now lives with her husband and three children in Brookline, MA.
Loading...
or
Not Currently Available for Direct Purchase