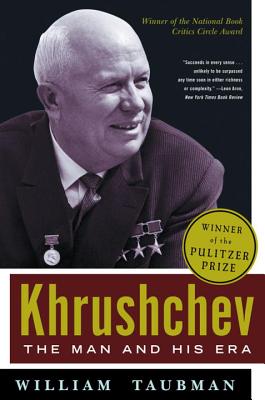 The Man and His Era

The definitive biography of the mercurial Soviet leader who succeeded and denounced Stalin. Nikita Khrushchev was one of the most complex and important political figures of the twentieth century. Ruler of the Soviet Union during the first decade after Stalin's death, Khrushchev left a contradictory stamp on his country and on the world. His life and career mirror the Soviet experience: revolution, civil war, famine, collectivization, industrialization, terror, world war, cold war, Stalinism, post-Stalinism. Complicit in terrible Stalinist crimes, Khrushchev nevertheless retained his humanity: his daring attempt to reform communism prepared the ground for its eventual collapse; and his awkward efforts to ease the cold war triggered its most dangerous crises.

This is the first comprehensive biography of Khrushchev and the first of any Soviet leader to reflect the full range of sources that have become available since the USSR collapsed. Combining a page-turning historical narrative with penetrating political and psychological analysis, this book brims with the life and excitement of a man whose story personified his era.

William Taubman is the Bertrand Snell Professor of Political Science Emeritus at Amherst College. His biography, Khrushchev: The Man and His Era, won the Pulitzer Prize and the National Book Critics Circle Award. He lives in Amherst, Massachusetts.

Praise For Khrushchev: The Man and His Era…

Thanks to Taubman, one of the most important figures of the 20th century finally has the biography he deserves.
— Strobe Talbott

Masterful and monumental...one should salute its author for a wonderful achievement.
— Robert G. Kaiser

A portrait unlikely to be surpassed any time soon in either richness or complexity....shines with mastery and authority.
— Leon Aron

The book is a gift, as fascinating as it is important.
— Robert Legvold
or support indie stores by buying on
Copyright © 2020 American Booksellers Association