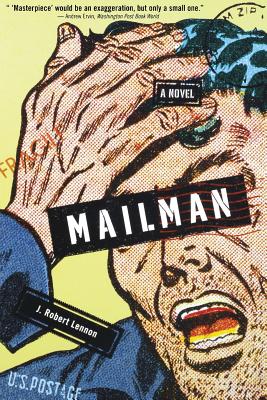 "'Masterpiece' would be an exaggeration, but only a small one."—Andrew Ervin, Washington Post Book World

"A phantasmagoria of American paranoia and self-loathing in the person of a deranged but somehow good-hearted middle-aged mail carrier in steep decline, the book hums with a kind of chipper angst," writes Jonathan Lethem in the Los Angeles Times Book Review. Mailman tells the blackly comic story of Albert Lippincott. Albert is Nestor, New York's mailman extraordinaire—aggressively cheerful, obsessively efficient. But he also has a few things to hide: his habit of reading other people's mail, a nervous breakdown, and a sexually ambiguous entanglement with his sister. Now his supervisors are on to his letter-hoarding compulsion, and there's a throbbing pain under his right arm. Things are closing in on Albert, who will soon be forced to confront, once and for all, his life's failures. Funny and moving, driven by a wild, compulsive interior voice, Mailman is a unique creation, a deeply original American novel. Already optioned to the movies, this astonishing and kinetically charged tale was one of the most exuberantly praised novels of 2003.


Praise For Mailman: A Novel…

As emotionally devastating as it is scabrously funny.
— Carina Chocano - Entertainment Weekly

Alfred Lippincott . . . is destined to become one of the great characters in American literature.
— David Henderson - Library Journal

Because I love books that are marked by strong narrative and a wealth of intimate detail, I found myself completely enthralled by this novel. In its straightforward but cunning portrayal of the Mailman and his voyeuristic universe, this book not only conveys the quite interesting inner life of its main character, but also poses a number of questions about identity, love and cultural transplantation. With an all-American veneer and a sense of humor that gives portions of this novel a nearly 1940-esque Hollywood coziness, it has its own heart of darkness, and, as such, is sure to please not only the reader who cherishes lively and rewarding fiction, but those who read for their inner enrichment as well.
— Oscar Hijuelos

J. Robert Lennon is the author of three previous novels. His stories have appeared in McSweeney's and The New Yorker. He lives in Ithaca, New York.
Loading...
or support indie stores by buying on