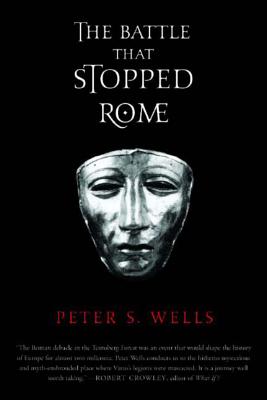 The Battle That Stopped Rome (Paperback)

Emperor Augustus, Arminius, and the Slaughter of the Legions in the Teutoburg Forest

The previously untold story of the watershed battle that changed the course of Western history.

In AD 9, a Roman traitor led an army of barbarians who trapped and then slaughtered three entire Roman legions: 20,000 men, half the Roman army in Europe. If not for this battle, the Roman Empire would surely have expanded to the Elbe River, and probably eastward into present-day Russia. But after this defeat, the shocked Romans ended all efforts to expand beyond the Rhine, which became the fixed border between Rome and Germania for the next 400 years, and which remains the cultural border between Latin western Europe and Germanic central and eastern Europe today.

This fascinating narrative introduces us to the key protagonists: the emperor Augustus, the most powerful of the Caesars; his general Varus, who was the wrong man in the wrong place; and the barbarian leader Arminius, later celebrated as the first German hero. In graphic detail, based on recent archaeological finds, the author leads the reader through the mud, blood, and decimation that was the Battle of Teutoburg Forest.

Peter S. Wells is professor of archaeology at the University of Minnesota. He is the author of The Battle That Stopped Rome and The Barbarians Speak. He lives in St. Paul.

Praise For The Battle That Stopped Rome: Emperor Augustus, Arminius, and the Slaughter of the Legions in the Teutoburg Forest…

Always literate and learned....Wells is able not only to reconstruct a credible analysis of the German strategy, but also to explore the thoughts and fears of the combatants on both sides as the massacre commenced.

Wells does an excellent job of weaving the few written accounts, recent archaeological evidence, and his own interpretation into a compelling story that is fluently written and well organized.

Gives the story in clear and engrossing detail.

Peter Wells conducts us to a hitherto mysterious and myth-enshrouded place....A journey well worth taking.
— Robert Cowley, editor of What If?
or
Buy Here
Copyright © 2020 American Booksellers Association