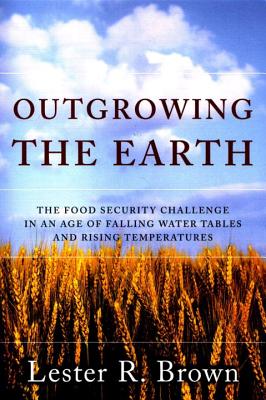 How human demands are outstripping the earth's capacities—and what we need to do about it.

Ever since 9/11, many have considered al Queda to be the leading threat to global security, but falling water tables in countries that contain more than half the world's people and rising temperatures worldwide pose a far more serious threat. Spreading water shortages and crop-withering heat waves are shrinking grain harvests in more and more countries, making it difficult for the world's farmers to feed 70 million more people each year. The risk is that tightening food supplies could drive up food prices, destabilizing governments in low-income grain-importing countries and disrupting global economic progress. Future security, Brown says, now depends on raising water productivity, stabilizing climate by moving beyond fossil fuels, and stabilizing population by filling the family planning gap and educating young people everywhere.

If Osama bin Laden and his colleagues succeed in diverting our attention from the real threats to our future security, they may reach their goals for reasons that even they have not imagined.


Praise For Outgrowing the Earth: The Food Security Challenge in an Age of Falling Water Tables and Rising Temperatures…

The book proposes that the challenge of feeding the world is at least as much about energy, water, climate and population. This view is no more than we should expect from Lester Brown, whose forte, eloquently expressed in the course of writing dozens of books over the past four decades, is to emphasize the links that connect all our development sectors, sometimes obviously, sometimes covertly, often crucially.
— Times Higher Education Supplement

Lester Brown advances our thinking on the food-security issues that the world will be wrestling with for years to come.
— Sustain

The book should be bought just to demonstrate how good arguments are put together.
— Paul Ganderton

Lester R. Brown is the founder of the Earth Policy and Worldwatch Institutes. He has been honored with numerous prizes, including a MacArthur Fellowship, the United Nations Environment Prize, and twenty-five honorary degrees. He lives in Washington, D.C.
Loading...
or support indie stores by buying on