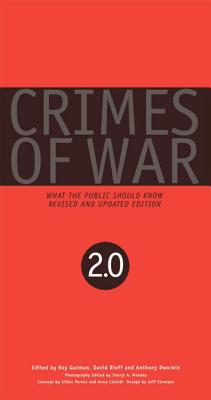 What the Public Should Know

"A reference that has no counterpart…. Civilization is in debt to all [the contributors]."—International Herald Tribune

Originally published in 1999, this A-to-Z guidebook of wartime atrocities has received worldwide acclaim and has been translated into eleven languages. Now substantially updated, with sixteen new entries, this concise guide to the broken rules of war remains unique and essential. More than 140 distinguished experts from the media, military, law, and human rights groups examine recent conflicts in light of international humanitarian law, including: Afghanistan (Patricia Gossman), the Congo (Gerard Prunier), terrorism (Anthony Dworkin), Guantánamo (Mark Huband), Darfur (John Prendergast and Colin Thomas-Jensen), occupation (George Packer), independent contractors (Peter Singer), war and insurgency (John Burns), and detention and interrogation (Dana Priest). Christiane Amanpour writes on Bosnian paramilitaries, Jeremy Bowen on Chechnya, and Gwynne Roberts on Saddam Hussein. Through case studies, definitions of key terms, and explanations of what is legal and what is not—illuminated by 150 stunning duotone photographs—Crimes of War reveals what every citizen should know about war and the law.

Anthony Dworkin is the executive director of the Crimes of War Project and a journalist based in London.


David Rieff is a New York-based journalist and the author of A Bed for the Night and At the Point of a Gun.