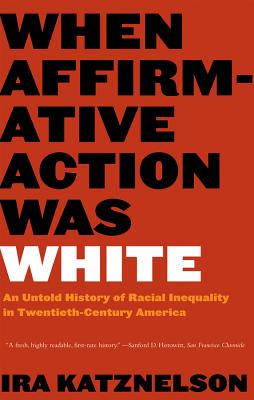 A groundbreaking work that exposes the twisted origins of affirmative action.


Praise For When Affirmative Action Was White: An Untold History of Racial Inequality in Twentieth-Century America…

Ira Katznelson has made a major contribution to the affirmative action debate[His] book makes as strong a case as I have ever seen for vigorous action to bring about equal opportunities for African-Americans.
— George M. Frederickson

A gem of a book.
— David Oshinsky

Katznelsons explosive analysis provides us with a new and painful understanding of how politics and race intersect.
— Henry Louis Gates Jr.

When Affirmative Action Was White was one of the first books that helped me concretely understand how racism was embedded into federal policy.
— Clint Smith, author of Counting Descent

Ira Katznelson is Columbia University's Interim Provost, Ruggles Professor of Political Science and History, and Deputy Director of Columbia World Projects. Having served as president of the American Political Science Association, he is a member of the Academy of Arts and Sciences and the American Philosophical Society. He is also the author of When Affirmative Action Was White and Fear Itself, winner of the Bancroft Prize in History (2014).
Loading...
or support indie stores by buying on
(This book is on backorder)