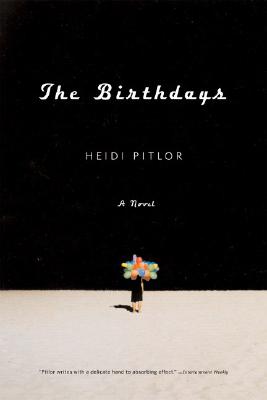 On an island off the coast of Maine, the Miller family reunites to celebrate the father's seventy-fifth birthday. Each of the adult children is expecting a first child, and at the same time each is at a major crossroads in life. The eldest, Daniel, still reeling from a car accident that has left him a paraplegic, is also grappling with the fact that his wife had to be artificially inseminated. Jake, the middle child, discovers that his wife is carrying twins after many trying years of fertility treatments. Hilary - the free-spirited youngest daughter - arrives in Maine five months pregnant with no identifiable father in sight. As the family gathers, something shattering happens from which no one will emerge the same. The Birthdays deftly explores the myriad ways of seeking sustenance after disappointment or loss. Reading group guide included.

Heidi Pitlor's fiction has been published in Ploughshares. She is a former senior editor at Houghton Mifflin and, as of 2007, will be the annual series editor for The Best American Short Stories. She lives in Boston, Massachusetts.

Praise For The Birthdays: A Novel…

Pitlor writes with a delicate hand to absorbing effect.

Offers sharp insights into simmering resentments and misunderstandings among relatives.

Pitlor demonstrates a remarkable understanding of family relationships and transitions.

Compare the ways in which the women who have married into the family interact with Ellen and Joe. Why do you think Liz connects with her in-laws, while Brenda doesn’t seem to?

At one point there is an exchange between MacNeil and Ellen where Ellen says of Daniel, “He could have been a real artist.” MacNeil replies, “He is a real artist.” Is MacNeil, a relative outsider, able to make a better assessment of Daniel? Does this relate to Ellen’s inability to understand what it is exactly that Jake does for a living?

What role do age and age differences play in each of the relationships? For example, Brenda is much younger than Daniel—how does this affect the way they relate to each other? How is Ellen’s affection for MacNeil, and for Joe, different from the affection expressed between the younger couples?

In addition to this, discuss the role of generational differences in the book. How do the parents’ expectations for their children affect the children’s own wants and goals? To what degree have Ellen’s and Joe’s philosophies on life rubbed off on their children?

Discuss which characters you most identify with and why. Is it easier to feel sympathetic to those whose difficulties are externally caused or accidental (like Daniel) than to those whose situation is largely due to their own choices (like Hilary)?

Do you agree with Brenda and Daniel’s decision to use an anonymous sperm donor (and artificial insemination)? If you found yourself in a similar situation, would you choose this solution?

Likewise, Jake and Liz have gotten pregnant with the help of modern science. Do they seem to have grappled with a moral crisis in making this decision? What do you make of our society’s embrace of reproductive technology?

Discuss Pitlor’s narrative approach. What is the effect of her telling the story told from all the different points of view?

Pitlor uses metaphor frequently. Discuss some of the most significant metaphors in The Birthdays. For example, does Joe’s turtle signify anything? What is the role of the art of Corcoran?

Why do you think Pitlor chose to set the book on an island? What role does the setting play? How can setting add to a story?