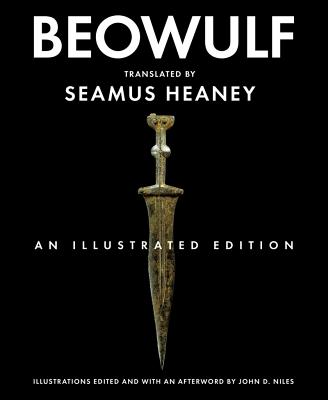 Composed toward the end of the first millennium, Beowulf ?is the elegiac narrative of the Scandinavian hero who saves the Danes from the seemingly invincible monster Grendel and, later, from Grendel's mother. Drawn to what he has called the "four-squareness of the utterance" in ?Beowulf ?and its immense emotional credibility Seamus Heaney gives the great epic convincing reality


But how to visualize the poet's story has always been a challenge for modern-day readers. In Beowulf: An Illustrated Edition, John D. Niles, a specialist in Old English literature, provides visual counterparts to Heaney's remarkable translation. More than one hundred full-page illustrations—Viking warships, chain mail, lyres, spearheads, even a reconstruction of the Great Hall—make visible Beowulf's world and the elemental themes of his story: death, divine power, horror, heroism, disgrace, devotion, and fame. This mysterious world is now transformed into one of material splendor as readers view its elegant goblets, dragon images, and finely crafted gold jewelry against the backdrop of the Danish landscape of its origins.

Seamus Heaney (1939—2013) was an Irish poet, playwright, translator, lecturer and recipient of the 1995 Nobel Prize in Literature. Born at Mossbawn farmhouse between Castledawson and Toomebridge, County Derry, he resided in Dublin until his death.

John D. Niles is the Nancy C. Hoefs Professor of English at the University of Wisconsin–Madison.
Loading...
or support indie stores by buying on