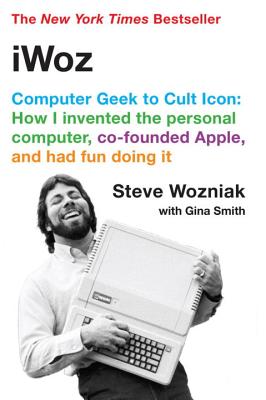 A New York Times Bestseller: "iWoz traces the life and times of a brilliant, gifted...individual whose contributions to the scientific, business and cultural realms are extensive." —Bookpage

Before slim laptops that fit into briefcases, computers looked like strange, alien vending machines. But in "the most staggering burst of technical invention by a single person in high-tech history" (BusinessWeek) Steve Wozniak invented the first true personal computer. Wozniak teamed up with Steve Jobs, and Apple Computer was born, igniting the computer revolution and transforming the world. In iWoz the mischievous genius with the low profile treats readers to a rollicking, no-holds-barred account of his life—for once, in the voice of the wizard himself.

Steve Wozniak has been inducted into the National Inventors Hall of Fame and has received numerous awards, including the National Medal of Technology and the Heinz Award. He lives in California.

Sincerity and enthusiasm are the hallmarks of this irrepressible memoir, and Wozniak's optimism offers an example to us all.
— Chris Hartman

This memoir truly reflects its author, both in its subject matter and its happy-go-lucky tone…A welcome, fresh perspective for an industry that seems so far removed from its original ideas.
— Peter Burrows

iWoz is the story about a man filled with curiosity and drive. It's about growing up in Silicon Valley at a watershed time for electronics and computing. And it's about never forgetting what makes a person happy in life and never forgetting one's dreams.

At last, Mr. Wozniak gets the stage all to himself [in a] chatty memoir full of surprises.... He reveals a technology pioneer more charming—and whose life is more poignant—than we expected.
— George Anders

The mastermind behind Apple tells his story for the first time, from the invention of the first personal computer to the rise of Apple as an industry giant.
or
Buy Here
Copyright © 2020 American Booksellers Association