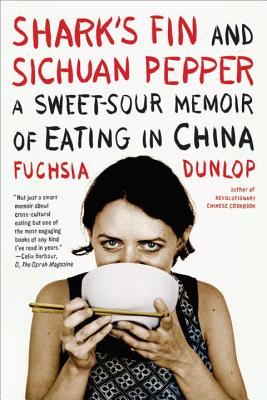 A Sweet-Sour Memoir of Eating in China

"Not just a smart memoir about cross-cultural eating but one of the most engaging books of any kind I've read in years." —Celia Barbour, O, The Oprah Magazine

After fifteen years spent exploring China and its food, Fuchsia Dunlop finds herself in an English kitchen, deciding whether to eat a caterpillar she has accidentally cooked in some home-grown vegetables. How can something she has eaten readily in China seem grotesque in England? The question lingers over this “autobiographical food-and-travel classic” (Publishers Weekly).

Fuchsia Dunlop is the author of Land of Fish and Rice, among other books. She has won four James Beard awards for her writing and lives in London.

Praise For Shark's Fin and Sichuan Pepper: A Sweet-Sour Memoir of Eating in China…

An insightful, entertaining, scrupulously reported exploration of China’s foodways and a swashbuckling memoir…What makes it a distinguished contribution to the literature of gastronomy is its demonstration…that food is not a mere reflection of culture but a potent shaper of cultural identity.
— Dawn Drzal

Destined, I think, to become a classic of travel writing.
— Paul Levy
or
Not Currently Available for Direct Purchase
Copyright © 2020 American Booksellers Association