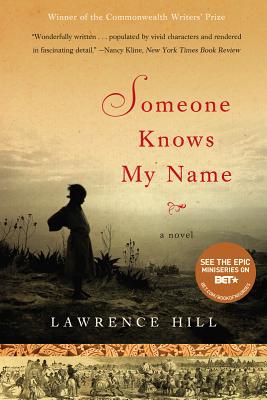 Someone Knows My Name

Kidnapped from Africa as a child, Aminata Diallo is enslaved in South Carolina but escapes during the chaos of the Revolutionary War. In Manhattan she becomes a scribe for the British, recording the names of blacks who have served the King and earned their freedom in Nova Scotia. But the hardship and prejudice of the new colony prompt her to follow her heart back to Africa, then on to London, where she bears witness to the injustices of slavery and its toll on her life and a whole people. It is a story that no listener, and no reader, will ever forget.

Published in Canada as The Book of Negroes and the basis for the award-winning BET miniseries of the same name.


Praise For Someone Knows My Name: A Novel…

Hill's depiction of [Aminata's] journey to freedom is a powerful tale of pride and perseverance.
— Sara Nelson - Oprah.com

A masterpiece, daring and impressive in its geographic, historical and human reach.
— Globe and Mail

Astonishing in scope, humanity and beauty, this is one of those very rare novels in which the deep joy of reading transcends its time and place. Like To Kill a Mockingbird, Someone Knows My Name lets readers experience a life, one footstep at a time, beside an unforgettable protagonist.

Lawrence Hill is the author of several novels including Someone Knows My Name, which won the Commonwealth Writers’ Prize and the Rogers Writers’ Trust Fiction Prize and was nominated in the United States for the Huston Wright Legacy Award. In 2015 Hill was appointed to the Order of Canada “for his contributions as an author and activist who tells the stories of Canada’s black community and of women and girls in Africa.” A graduate of the Writing Seminars at The Johns Hopkins University in Baltimore, he lives in Ontario, Canada.