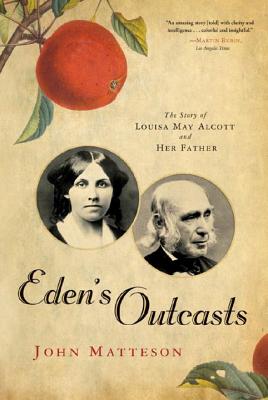 The Story of Louisa May Alcott and Her Father

Louisa May Alcott is known universally. Yet during Louisa's youth, the famous Alcott was her father, Bronson—an eminent teacher and a friend of Emerson and Thoreau. He desired perfection, for the world and from his family. Louisa challenged him with her mercurial moods and yearnings for money and fame. The other prize she deeply coveted—her father's understanding—seemed hardest to win. This story of Bronson and Louisa's tense yet loving relationship adds dimensions to Louisa's life, her work, and the relationships of fathers and daughters.

Praise For Eden's Outcasts: The Story of Louisa May Alcott and Her Father…

Matteson…tells his story so clearly and attractively that no previous acquaintance with the remarkable Alcott clan and their various, equally remarkable friends is needed to relish their world as he re-creates it. Vividly, affectingly, Matteson describes one family’s struggle to live their lives with meaning, without taint or exploitation.
— Philip McFarland - Boston Globe

A double biography is a difficult thing to bring off but Matteson does it beautifully, giving a vivid but delicate account of two complicated characters inextricably entwined.
— Rosemary Hill - The Guardian

One of the pleasures of the book is to be taken back to a time and place of intellectual and moral grandeur…In producing such a rounded, detailed and compelling portrait of Louisa, [her father] Bronson, their family and their times, Matteson has provided us with a valuable context for appreciating that enduring masterpiece Little Women.

Matteson’s engrossing biography of the Alcotts achieves a rare fusion of intellectual precision and emotional empathy.
— Madeleine B. Stern, author of Louisa May Alcott

Matteson’s portrait of Bronson and Louisa is painted on a large canvas, capturing an era when ideals and practice collided as never before in the history of the American nation.
— Megan Marshall, author of The Peabody Sisters

Matteson tells the odd, fascinating story of the über idealistic Bronson Alcott and the impact of his life decisions on his daughter, beloved children’s book authoress Louisa May Alcott…Particularly for those unfamiliar with the Alcott story, this is a journey of much interest.
— Christian Science Monitor

In Eden’s Outcasts John Matteson represents father and daughter as fallible, fascinating, and lovable people who in the dramatic interplay of their lives came to accept and appreciate themselves and each other. Against the backdrop of Transcendentalism, Abolitionism, and the Civil War, peopled by the leading lights of their times, theirs is a family romance full of incident and surprise, told by Matteson with skill, erudition, and insight.

— Harriett Reisen, author and codirector of The Louisa May Alcott Project

John Matteson was awarded the Pulitzer Prize for Biography for Eden’s Outcasts and the Ann M. Sperber Prize for The Lives of Margaret Fuller. A Distinguished Professor of English at John Jay College of Criminal Justice, he lives in the Bronx.
Loading...
or support indie stores by buying on