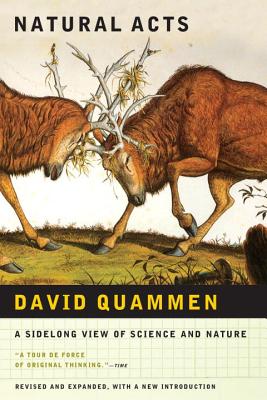 A Sidelong View of Science and Nature

"David Quammen is simply the best natural essayist working today."--Tim Cahill, author of Lost in My Own Backyard

"Lively writing about science and nature depends less on the offering of good answers, I think, than on the offering of good questions," said David Quammen in the original introduction to Natural Acts. For more than two decades, he has stuck to that credo. In this updated version of curiosity leads him from New Mexico to Romania, from the Congo to the Amazon, asking questions about mosquitoes (what are their redeeming merits?), dinosaurs (how did they change the life of a dyslexic Vietnam vet?), and cloning (can it save endangered species?).

This revised and expanded edition best-loved "Natural Acts" columns, which first appeared in Outside magazine in the early 1980s, and includes recent pieces such as "Planet of Weeds," an influential new Natural Acts is an eye-opening journey that will please both Quammen fans and newcomers to his work.

David Quammen is the author of The Song of the Dodo, among other books. He has been honored with the John Burroughs Medal for nature writing, an Academy Award in Literature from the American Academy of Arts and Letters, an award in the art of the essay from PEN, and (three times) the National Magazine Award. Quammen is also a contributing writer for National Geographic. He lives in Bozeman, Montana.
Loading...
or support indie stores by buying on