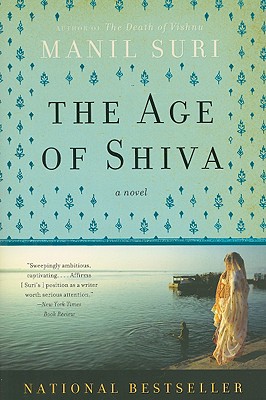 "A stunning novel, proof that Manil Suri is a major storyteller of heart and intelligence." —Amy Tan

The Age of Shiva is at once a powerful story of a country in turmoil and an "unflinchingly honest" portrait of maternal love—"intricately interwoven with the ancient rites and myths" (Booklist) crucial to India's history. Meera, the narrator, is seventeen years old when she catches her first glimpse of Dev, performing a song so infused with passion that it arouses in her the first flush of erotic longing. She wonders if she can steal him away from Roopa, her older, more beautiful sister, who has brought her along to see him. It is only when her son is born that Meera begins to imagine a life of fulfillment. She engulfs him with a love so deep, so overpowering, that she must fear its consequences. Meera's unforgettable story, embodying Shiva as a symbol of religious upheaval, places The Age of Shiva among the most compelling novels to emerge from contemporary India. Reading group guide included.


Praise For The Age of Shiva: A Novel…

As in his first novel, Suri uses tales of Hindu gods and goddesses to illuminate mortal hearts. A rich and multilayered read.
— O Magazine

A sensuous, nuanced portrait of motherhood.
— The New Yorker

Drawn by this compelling narrative, I read this marvelous book in one sitting.
— Kiran Desai, author of The Inheritance of Loss

Manil Suri is a distinguished mathematics professor at the University of Maryland, Baltimore County. Author of three acclaimed novels, including The Death of Vishnu, he is a former contributing opinion writer at the New York Times, for which he has written several widely read pieces on mathematics. He lives in Silver Spring, Maryland.
Loading...
or
Not Currently Available for Direct Purchase