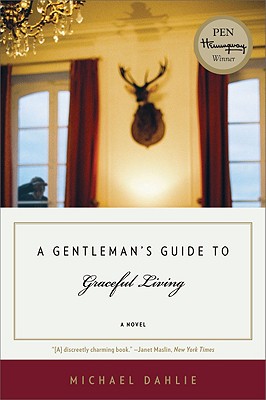 A Gentleman's Guide to Graceful Living

“A tour filled with moments of grace and angst, and an overwhelming sense that compassion matters.” —Minneapolis Star Tribune

Arthur Camden’s greatest talents are for packing and unpacking suitcases, making coleslaw, and second-guessing every decision in his life. When his business fails and his wife leaves him—to pursue more aggressive men—Arthur finds that he has none of the talents and finesse that everyone else seems to possess for navigating New York society.


Praise For A Gentleman's Guide to Graceful Living: A Novel…

You will root for this winsome, unique narrator to the very end.
— Boston Sunday Globe

Charming. . . . Mr. Dahlie’s debut novel takes a surprising tack. It deals quite affectionately with its central character and his frailties.
— New York Times

Dahlie’s dry and understated portrayal of old upper-crust Manhattan is as crisp and authentic as a well-made gin and tonic.
— Publishers Weekly

Michael Dahlie is the author of The Best of Youth and A Gentleman’s Guide to Graceful Living, winner of the 2009 PEN/Hemingway Award, and he received a Whiting Award in 2010. He is an Associate Professor in Butler University’s English Department and MFA Program and he directs the Mont Blanc Writing Seminars, held every June in Chamonix, France. He lives in Indianapolis.
Loading...
or support indie stores by buying on