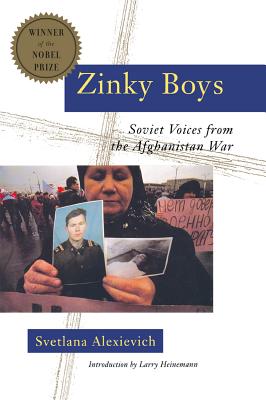 Soviet Voices from the Afghanistan War

Winner of the Nobel Prize: “For her polyphonic writings, a monument to suffering and courage in our time.” —Swedish Academy, Nobel Prize citation

From 1979 to 1989 a million Soviet troops engaged in a devastating war in Afghanistan that claimed 50,000 casualties—and the youth and humanity of many tens of thousands more. Creating controversy and outrage when it was first published in the USSR—it was called by reviewers there a “slanderous piece of fantasy” and part of a “hysterical chorus of malign attacks”—Zinky Boys presents the candid and affecting testimony of the officers and grunts, nurses and prostitutes, mothers, sons, and daughters who describe the war and its lasting effects. What emerges is a story that is shocking in its brutality and revelatory in its similarities to the American experience in Vietnam. The Soviet dead were shipped back in sealed zinc coffins (hence the term “Zinky Boys”), while the state denied the very existence of the conflict. Svetlana Alexievich brings us the truth of the Soviet-Afghan War: the beauty of the country and the savage Army bullying, the killing and the mutilation, the profusion of Western goods, the shame and shattered lives of returned veterans. Zinky Boys offers a unique, harrowing, and unforgettably powerful insight into the realities of war.


Praise For Zinky Boys: Soviet Voices from the Afghanistan War…

“[Alexievich’s] voice is much more than the sum of [her subject’s] voices . . . [making] that war as all-encompassingly present and personal—as real—as any fictional account ever did for any other war.
— Philip Gourevitch - The New Yorker

For the past 30 or 40 years [Alexievich has] been busy mapping the Soviet and post-Soviet individual, but [her work is] not really about a history of events. It’s a history of emotions—what she’s offering us is really an emotional world, . . . a history of the soul.
— Sara Danius, Permanent Secretary of the Swedish Academy

A masterpiece of reportage, probably her best book.
— Timothy Snyder - The New York Review of Books

Svetlana Alexievich, a journalist and prose writer, lives in Minsk, Belarus. In 2015 she was awarded the Nobel Prize in Literature.
Loading...
or support indie stores by buying on