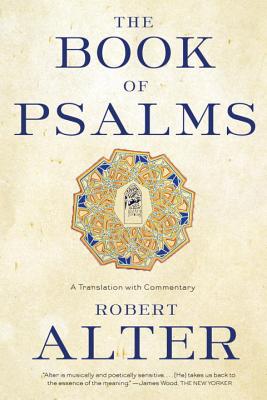 The Book of Psalms

A Translation with Commentary

One of Newsweek’s Best Books of the Year and winner of the Robert Kirsch Award for Lifetime Achievement.

A cornerstone of the scriptural canon, the Book of Psalms has been a source of solace and joy for countless readers over millennia. This timeless poetry is beautifully wrought by a scholar whose translation of the Five Books of Moses was hailed as a “godsend” by Seamus Heaney and a “masterpiece” by Robert Fagles. Alter’s The Book of Psalms captures the simplicity, the physicality, and the coiled rhythmic power of the Hebrew, restoring the remarkable eloquence of these ancient poems. His learned and insightful commentary illuminates the obscurities of the text.


Praise For The Book of Psalms: A Translation with Commentary…

You think you know these texts . . . until you read Alter, who reignites their beauty in bracing and unexpected ways.
— Malcolm Jones - Newsweek

Alter is musically and poetically sensitive.... [He] takes us back to the essence of the meaning.
— James Wood - The New Yorker

Extraordinary.... We never forget, with Alter's Psalms, that the text we are reading is the work of human hands—not Holy Writ, but something at once less and more than that, great poetry.
— Adam Kirsch - New Republic

It is impossible to overstate the depth, the versatility, and the value of Alter's contribution.
— Barbara Berman - San Francisco Chronicle

One of the best outcomes of Alter's translation is a sense of an abrupt, muscular intensity; he restores to the Psalms a kind of strangeness that emanates from an encounter with a culture we recognize yet is distinctly alien to us, far removed in time and frame of mind.
— Mark Doty - Los Angeles Times

Every reader of this translation will be led towards fresh thoughts and will discover favorites that inspire the imagination in new, rich ways.
— Walter Brueggemann - Christian Century

In his compelling and swiftly moving translations, Alter has thrust the reader back to the place where the monotheistic religions were born out of even more ancient beginnings.
— Jewish Book World

The achievement of this new translation is to present the Book of Psalms as a wonder of ancient literature.
— The Tablet

Robert Alter's translation of the Hebrew Bible, the magnificent capstone to a lifetime of distinguished scholarly work, has won the PEN Center Literary Award for Translation. His immense achievements in scholarship ranging from the eighteenth-century European novel to contemporary Hebrew and American literature earned Alter the Robert Kirsch Award for Lifetime Achievement from the Los Angeles Times. A member of the American Academy of Arts and Sciences and the American Philosophical Society, Alter is the Class of 1937 Professor of Hebrew and Comparative Literature at the University of California, Berkeley.
Loading...
or support indie stores by buying on