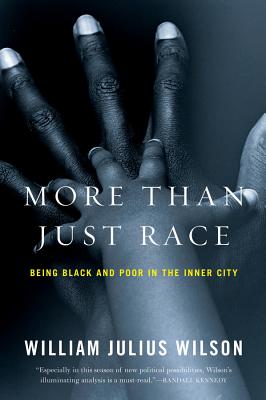 A preeminent sociologist of race explains a groundbreaking new framework for understanding racial inequality, challenging both conservative and liberal dogma.

In this timely and provocative contribution to the American discourse on race, William Julius Wilson applies an exciting new analytic framework to three politically fraught social problems: the persistence of the inner-city ghetto, the plight of low-skilled black males, and the fragmentation of the African American family. Though the discussion of racial inequality is typically ideologically polarized. Wilson dares to consider both institutional and cultural factors as causes of the persistence of racial inequality. He reaches the controversial conclusion that while structural and cultural forces are inextricably linked, public policy can only change the racial status quo by reforming the institutions that reinforce it.


Praise For More than Just Race: Being Black and Poor in the Inner City (Issues of Our Time)…

A refreshing, multilayered study of racial inequality in America. . . . Reshapes the frame through which race and poverty are viewed.

Straightforward, accessible and sensible, free of . . . ideological cant and posturing.

William Julius Wilson is a University Professor at Harvard University, president emeritus of the American Sociological Association, and the author of numerous books, including the award-winning The Declining Significance of Race and When Work Disappears. He lives in Cambridge, Massachusetts.
Loading...
or support indie stores by buying on