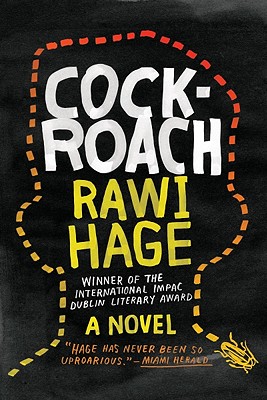 In Montreal's restless immigrant community, our unnamed narrator is living in despair. Forced to visit a therapist after a suicide attempt, he brings us back to his childhood in a war-torn country, forward into his current life in the smoky émigré cafés where everyone has a tale, and out into the frozen nighttime streets of Montreal, where he imagines himself to be a cockroach invading the lives of the privileged, but willfully blind, citizens who surround him. Cockroach is a carnivalesque, philosophical novel that weaves dark humor with an accusatory, satirical voice, spawning from the subsurface to challenge humanity and its downfall.

Rawi Hage  is the author of four novels. Beirut Hellfire Society was longlisted for the Scotiabank Giller Prize, shortlisted for the Rogers Writers’ Trust Fiction Prize, and a finalist for the Governor General’s Literary Award. Born in Beirut, Lebanon, Hage now lives in Montreal.

Praise For Cockroach: A Novel…

There is something exhilarating about [Cockroach's] relentlessness. . . . The narrator is ambiguous, untrustworthy, sly, and filled with a despair both nasty and noisy; but he is also deeply wounded, oddly lovable, his voice both moving and manipulative.