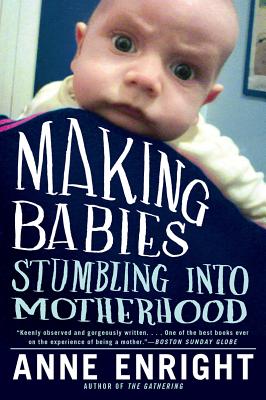 “One of the best books ever on the experience of being a mother.”—Boston Sunday Globe

Anne Enright was married for eighteen years before she and her husband started having children. Already a confident, successful novelist, Enright continued to work after each of her two children was born; while each baby slept, those first two years of life, Enright wrote in dispatches about the mess, the glory, and the raw shock of motherhood. Supremely observant and endlessly quizzical, Enright “has pulled off that rarest of tricks: writing brilliantly about happiness” (Sunday Times).

An oddly sweet-and-sour but loving memoir about becoming a mother.
— Dwight Garner

To write well in the mother-child arena, a person must understand that the essential condition of motherhood . . . is absurdity. Samuel Beckett could have come up with a great book on babies. Anne Enright has.
— Judith Newman

[A] field guide to both the romance and reality of what it means to create and care for other humans, delivered by narration that evinces deep sincerity and the purest happiness.

At once a memoir, a reference manual and a cautionary tale about the conflicting emotions of parenthood…. For those who’ve grown weary of hyped-up superparents and their relentless positivity, [Enright’s] candor is welcome.

Keenly observed and gorgeously written… one of the best books ever on the experience of being a mother. Because it’s an experience so many of us share, Enright’s fearless and funny inquiry into why motherhood feels the way it does is not only entertaining, it’s deeply consoling.
or
Buy Here
Copyright © 2020 American Booksellers Association