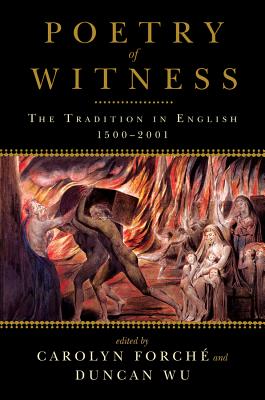 A groundbreaking anthology containing the work of poets who have witnessed war, imprisonment, torture, and slavery.

A companion volume to Against Forgetting, Poetry of Witness is the first anthology to reveal a tradition that runs through English-language poetry. The 300 poems collected here were composed at an extreme of human endurance—while their authors awaited execution, endured imprisonment, fought on the battlefield, or labored on the brink of breakdown or death. All bear witness to historical events and the irresistibility of their impact. Alongside Shakespeare, Milton, and Wordsworth, this volume includes such writers as Anne Askew, tortured and executed for her religious beliefs during the reign of Henry VIII; Phillis Wheatley, abducted by slave traders; Samuel Bamford, present at the Peterloo Massacre in 1819; William Blake, who witnessed the Gordon Riots of 1780; and Samuel Menashe, survivor of the Battle of the Bulge.

Poetry of Witness argues that such poets are a perennial feature of human history, and it presents the best of that tradition, proving that their work ranks alongside the greatest in the language.

Carolyn Forché, poet, translator, and activist, is professor of English at Georgetown University. She has published two award-winning volumes of poetry, Gathering the Tribes and The Country Between Us. In 1990 Ms. Fourché received a Lannan Literary Award, granted to poets and writers of literary excellence "whose work promotes a truer understanding of contemporary life." Her most recent volume of poetry is Blue Hour.

Duncan Wu is professor of English at Georgetown University. He is the editor of Romanticism: An Anthology.
Loading...
or
Not Currently Available for Direct Purchase