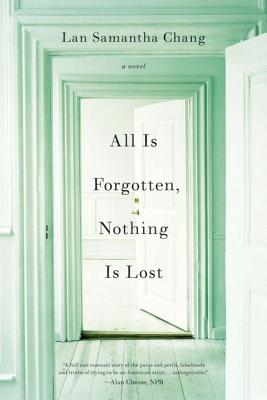 All Is Forgotten, Nothing Is Lost (Paperback)

At the renowned writing school in Bonneville, every student is simultaneously terrified of and attracted to the charismatic and mysterious poet and professor Miranda Sturgis, whose high standards for art are both intimidating and inspiring. As two students, Roman and Bernard, strive to win her admiration, the lines between mentorship, friendship, and love are blurred.

Roman's star rises early, and his first book wins a prestigious prize. Meanwhile, Bernard labors for years over a single poem. Secrets of the past begin to surface, friendships are broken, and Miranda continues to cast a shadow over their lives. What is the hidden burden of early promise? What are the personal costs of a life devoted to the pursuit of art? All Is Forgotten, Nothing Is Lost is a brilliant evocation of the demands of ambition and vocation, personal loyalty and poetic truth.

Lan Samantha Chang's fiction has appeared in Atlantic Monthly, Story and The Best American Short Stories 1994 and 1996. Chang is the author of the award-winning books Hunger and Inheritance, and the novel All Is Forgotten, Nothing Is Lost. She is the recipient of the Wallace Stegner and Truman Capote fellowships at Stanford University. She also received, from the Iowa Writers' Workshop, a Teaching-Writing fellowship and a Michener-Copernicus fellowship. Her many awards include a Guggenheim Fellowship, and she was a finalist for the Los Angeles Times Book Prize. She lives in Iowa City, Iowa, where she directs the University of Iowa Writers’ Workshop.

Praise For All Is Forgotten, Nothing Is Lost: A Novel…

The first woman and first Asian American to be director of the University of Iowa Writers’ Workshop, Chang writes from personal history. Her characters are three-dimensional and not predictable, and with her simple, elegant style she achieves a clarity that few writers accomplish.... Chang is an author worth reading now—and watching in the future.

[Lan Samantha Chang] takes her characters seriously, unraveling Roman's need for approval; his friend Bernard's garretted isolation and disdain for the business of poetry; Miranda's power and her fall from grace.

A full and resonant story of the pains and perils, falsehoods and truths of trying to be an American artist . . . unforgettable.
— Alan Cheuse

All Is Forgotten, Nothing Is Lost offers a starkly honest portrait of people caught up in the drive to write and of the personal bargains and self-deceptions that such an ambition can entail. Lan Samantha Chang was brave to write this book, to turn her novelist's eye onto a world she knows intimately, and her bravery pays off in the unflinching final scenes.

What a lovely, fierce book about love, betrayal, loss, and time’s dominion over us all. Fleet, preternaturally attuned to the ebb and flow of personal history, All Is Forgotten, Nothing Is Lost is, well, unforgettable. Lan Samantha Chang sees deeply into her characters, right down to their souls, but she wields her intelligence with the compassion of a master.

— Scott Spencer, author of A Ship Made of Paper