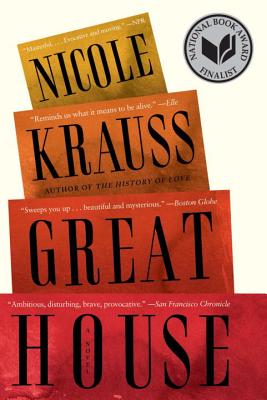 For twenty-five years, a reclusive American novelist has been writing at the desk she inherited from a young Chilean poet who disappeared at the hands of Pinochet’s secret police; one day a girl claiming to be the poet’s daughter arrives to take it away, sending the writer’s life reeling. Across the ocean, in the leafy suburbs of London, a man caring for his dying wife discovers, among her papers, a lock of hair that unravels a terrible secret. In Jerusalem, an antiques dealer slowly reassembles his father’s study, plundered by the Nazis in Budapest in 1944.

Connecting these stories is a desk of many drawers that exerts a power over those who possess it or have given it away. As the narrators of Great House make their confessions, the desk takes on more and more meaning, and comes finally to stand for all that has been taken from them, and all that binds them to what has disappeared. Great House is a story haunted by questions: What do we pass on to our children and how do they absorb our dreams and losses? How do we respond to disappearance, destruction, and change?

"This is a novel about the long journey of a magnificent desk as it travels through the twentieth century from one owner to the next. It is also a novel about love, exile, the defilements of war, and the restorative power of language." —National Book Award citation

One of America’s most important novelists and an international literary sensation.
— Sam Tanenhaus

[Krauss] writes of her characters’ despair with striking lucidity…an eloquent dramatization of the need to find that missing piece that will give life its meaning.
— Sam Sacks

Although most of her characters are prisoners of the past, Krauss herself is a fiction pioneer, toying with fresh ways of rendering experience and emotion, giving us readers the thrill of seeing the novel stretched into amorphous new shapes.
— Maureen Corrigan

Reminds us what it means to be alive.
— Rachel Rosenblit

A novel brimming with insights into the human psyche…often haunting and ultimately rewarding.
— Monica Rhor

Delayed revelation is one of the author’s signatures, and in this, her third novel, she manages it with satisfying élan…Krauss’s organic scenes soar, she is stunning.
— Karen R. Long

Exquisite…Krauss is a poetic stylist whose prose gives tremendous weight to her characters’ pain and struggles.
— Sharon Dilworth

Krauss’ masterful rendition of character is breathtaking, compelling.… This tour de force of fiction writing will deeply satisfy fans of the author’s first two books and bring her legions more.

Stunning…I was captivated by the first chapter and never disappointed thereafter. The richness of invention, the beauty of the prose, the aptness of her central images, the depth of feeling: who would not be moved?
— Andrea Barrett

Full of cogent insights…an exercise in kaleidoscopic storytelling, a novel that seeks to weave four groups of characters into a larger meditation on memory and loss.
— David L. Ulin

Nicole Krauss has been hailed by the New York Times as "one of America’s most important novelists." She is the author of Man Walks Into a Room, a finalist for the Los Angeles Times Book of the Year; The History of Love, a New York Times bestseller and winner of the Saroyan Prize for International Literature; Great House, a New York Times bestseller and finalist for the National Book Award; Forest Dark; and most recently, To Be a Man: Stories. In 2007 she was selected as one of Granta's Best Young American Novelists, and in 2010 she was chosen for the New Yorker’s ‘Twenty Under Forty’ list. Her fiction has been published in the New Yorker, Harper's, Esquire, and Best American Short Stories, and her books have been translated into more than thirty-seven languages. Nicole Krauss lives in Brooklyn, New York.

The large and imposing desk in the novel is passed from life to life, moving through space and time to link the characters in the novel to one another and to the past. What does this inheritance represent for each? Is it a burden?

A sense of loss—of a child, a parent, a lover, a home, youth, an illusion, and so many other things—suffuses the novel. How do the characters respond to loss, destruction, and change?

The novel is composed of intimate and emotional monologues that each have the tone of a confession. What do Nadia, or Arthur, or Aaron feel themselves to be guilty of? What role does judgment play in the novel?

Many of the characters are haunted by doubt or uncertainty, whether it’s moral doubt, self-doubt, or the doubt that comes with a realization of the limits of how fully known we can ever be to one another, of how often we must live unknown and unknowing. What is the nature of Nadia’s doubt, as expressed in the question that afflicts her: What if I had been wrong? What kind of uncertainty did Arthur feel in his marriage? And Aaron, as a father? What about Yoav and Leah Weisz?

Why do you think Lotte chose to give her child away? And why did Nadia choose to give up children, her marriage, a social life—everything but her solitude? What other kinds of sacrifices do the characters make?

What role does regret play in the novel?

What is the significance of the locked and empty desk drawer?

How does the story of Ben Zakkai and the destruction of Jerusalem—a response to catastrophic loss that led to a radical reinvention of Judaism that allowed it to survive in the Diaspora—relate to the rest of the novel?