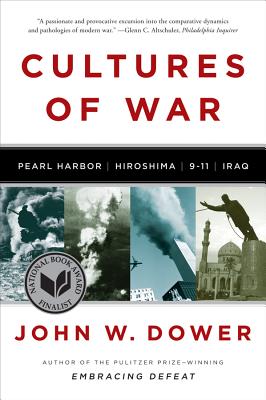 Finalist for the 2010 National Book Award in Nonfiction and the Los Angeles Times Book Prize: “A thought-provoking . . . book about the way events echo—and mis-echo—down the corridors of history.”—Financial Times

Over recent decades, John W. Dower, one of America’s preeminent historians, has addressed the roots and consequences of war from multiple perspectives. In War Without Mercy (1986), winner of the National Book Critics Circle Award, he described and analyzed the brutality that attended World War II in the Pacific, as seen from both the Japanese and the American sides. Embracing Defeat (1999), winner of numerous honors including the Pulitzer Prize and the National Book Award, dealt with Japan’s struggle to start over in a shattered land in the immediate aftermath of the Pacific War, when the defeated country was occupied by the U.S.-led Allied powers.

Turning to an even larger canvas, Dower now examines the cultures of war revealed by four powerful events—Pearl Harbor, Hiroshima, 9-11, and the invasion of Iraq in the name of a war on terror. The list of issues examined and themes explored is wide-ranging: failures of intelligence and imagination, wars of choice and “strategic imbecilities,” faith-based secular thinking as well as more overtly holy wars, the targeting of noncombatants, and the almost irresistible logic—and allure—of mass destruction. Dower’s new work also sets the U.S. occupations of Japan and Iraq side by side in strikingly original ways.

One of the most important books of this decade, Cultures of War offers comparative insights into individual and institutional behavior and pathologies that transcend “cultures” in the more traditional sense, and that ultimately go beyond war-making alone.

A whopper of a book in both length and intellectual substance. . . . The chapters on the U.S. incendiary and atomic bombing of Japan and the start of the nuclear arms race could stand alone as the wisest current treatment of that vexed history.
— Michael Sherry - American Scholar

A profoundly sobering reflection on war and the many cultures of self-delusion that we, like all other mortal nations, continue to ignore at ever deepening peril.
— Gar Alperovitz, author of The Decision to Use the Atomic Bomb

Dower has found much new and revelatory to tell us about the inanities and horrors of the Bush/Cheney years, and this book goes much deeper-and raises devastating questions about the history we think we know.
— Seymour M. Hersch, author of Chain of Command

John W. Dower is the author of Embracing Defeat, winner of the National Book Award and the Pulitzer Prize; War without Mercy, winner of the National Book Critics Circle Award; and Cultures of War. He is professor emeritus of history at MIT. In addition to authoring many books and articles about Japan and the United States in war and peace, he is a founder and codirector of the online “Visualizing Cultures” project established at MIT in 2002 and dedicated to the presentation of image-driven scholarship on East Asia in the modern world. He lives in Boston, Massachusetts.
Loading...
or
Not Currently Available for Direct Purchase