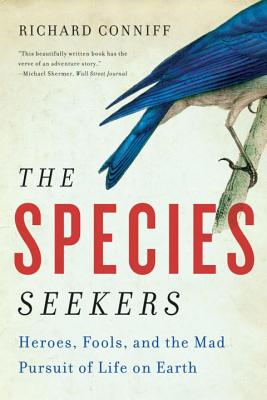 Heroes, Fools, and the Mad Pursuit of Life on Earth

"This beautifully written book has the verve of an adventure story." —Wall Street Journal

From the mid-eighteenth century to the early twentieth, a colorful band of amateur naturalists explored the most perilous corners of the planet to discover new life-forms. Amid globe-spanning tales of adventure, Richard Conniff recounts a dramatic historical shift, as humans finally discovered the pantheon of life on Earth-and our place within it.

Praise For The Species Seekers: Heroes, Fools, and the Mad Pursuit of Life on Earth…

An anecdotal romp through the strange history of naturalism. Absurd characters, exciting discoveries, and fierce rivalries abound.
— Outside Magazine

An enduring story bursting at the seams with intriguing, fantastical and disturbing anecdotes.
— New Scientist

[This] history of the ‘great age of discovery’ is spellbinding.
— Publishers Weekly

[Conniff’s] enthusiasm for his subject and admiration of these explorers is infectious…an entertaining survey.
— Kirkus Reviews

Modern biology and medicine would not be what they are today if not for the death-defying naturalists who set out to travel the world and find new species. In The Species Seekers, Richard Conniff creates a marvelous rogues’ gallery of these brave, sometimes reckless heroes of taxonomy, full of surprising tales of gorillas, platypuses, and disease-laden mosquitoes.

A marvelous tribute to the age of wonder.
— Bernd Heinrich, author of White Feathers and Racing the Clock

Richard Conniff, a Guggenheim Fellow and winner of the National Magazine Award, writes for Smithsonian and National Geographic and is a frequent commentator on NPR's All Things Considered and a guest columnist for the New York Times. His books include The Natural History of the Rich, Swimming with Piranhas at Feeding Time, and The Species Seekers. He lives in Old Lyme, Connecticut.
Loading...
or
Not Currently Available for Direct Purchase