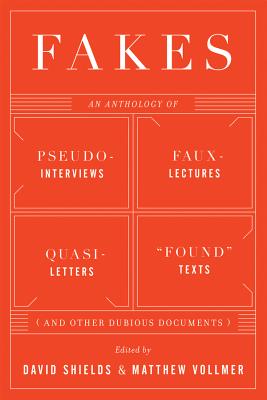 Contemporary short stories enacting giddy, witty revenge on the documents that define and dominate our lives.

In our bureaucratized culture, we’re inundated by documents: itineraries, instruction manuals, permit forms, primers, letters of complaint, end-of-year reports, accidentally forwarded email, traffic updates, ad infinitum. David Shields and Matthew Vollmer, both writers and professors, have gathered forty short fictions that they’ve found to be seriously hilarious and irresistibly teachable (in both writing and literature courses): counterfeit texts that capture the barely suppressed frustration and yearning that percolate just below the surface of most official documents. The innovative stories collected in Fakes—including ones by Ron Carlson (a personal ad), Amy Hempel (a complaint to the parking department), Rick Moody (Works Cited), and Lydia Davis (a letter to a funeral parlor)—trace the increasingly blurry line between fact and fiction and exemplify a crucial form for the twenty-first century.

David Shields, the author of Reality Hunger, is the Milliman Distinguished Writer-in-Residence at the University of Washington.

Matthew Vollmer is the author of Future Missionaries of America, a collection of stories, as well as Inscriptions for Headstones, a collection of essays. He is the editor of A Book of Uncommon Prayer, which collects invocations from over sixty acclaimed and emerging authors, and with David Shields is co-editor of Fakes; An Anthology of Pseudo-Interviews, Faux-Lectures, Quasi-Letters, “Found” Texts, and Other Fraudulent Artifacts. His work has appeared in a range of anthologies and magazines, including The Paris Review, Ploughshares, Glimmer Train, Tin House, Virginia Quarterly Review, Epoch, Best American Essays and The Pushcart Prize Anthology. He directs the undergraduate creative writing program at Virginia Tech.
Loading...
or
Not Currently Available for Direct Purchase