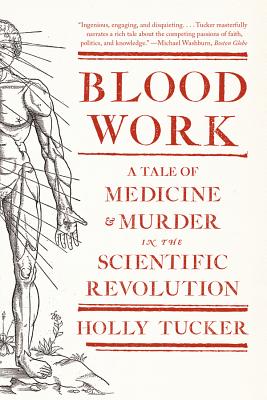 A Tale of Medicine and Murder in the Scientific Revolution

"Excellent…Tucker’s chronicle of the world of 17th-century science in London and Paris is fascinating." —The Economist

In December 1667, maverick physician Jean Denis transfused calf’s blood into one of Paris’s most notorious madmen. Days later, the madman was dead and Denis was framed for murder. A riveting exposé of the fierce debates, deadly politics, and cutthroat rivalries behind the first transfusion experiments, Blood Work takes us from dissection rooms in palaces to the streets of Paris, providing an unforgettable portrait of an era that wrestled with the same questions about morality and experimentation that haunt medical science today.

Praise For Blood Work: A Tale of Medicine and Murder in the Scientific Revolution…

Ingenious, engaging, and disquieting…Tucker masterfully narrates a rich tale about the competing passions of faith, politics, and knowledge.
— Boston Globe

Tucker’s sleuthing
adds drama to an utterly compelling picture of Europe at the moment when modern
science was being shaped.
— Publishers Weekly (starred review)

Smart and addictive.
— Deborah Blum, author of The Poisoner's Handbook

Blood Work is fascinating and richly-researched, giving us a gory glimpse of the dawn of our scientific age.

— Carl Zimmer, author of She Has Her Mother's Laugh

Blood Work is a magnificent story of the heady days when transfusions were first being performed. There is drama, intrigue, discovery and revelation in this tale and the writing is terrific.

Holly Tucker is the author of City of Light, City of Poison and Blood Work, a finalist for the Los Angeles Times Book Prize and the Times Literary Supplement Book of the Year, and is a professor of French at Vanderbilt University. She lives in Nashville, Tennessee, and Aix-en-Provence, France.
Loading...
or support indie stores by buying on