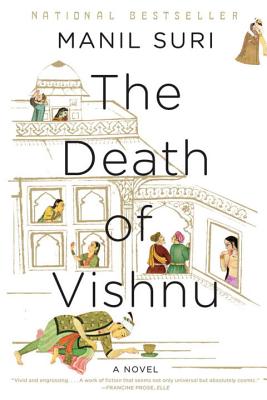 In Manil Suri’s debut novel, Vishnu, the odd-job man, lies dying on the staircase of an apartment building while around him unfold the lives of its inhabitants: warring housewives, lovesick teenagers, a grieving widower. In a fevered state, Vishnu looks back on his love affair with the seductive Padmini and wonders if he might actually be the god Vishnu, guardian of the entire universe.

Praise For The Death of Vishnu: A Novel…

A deft and confident first novel…the finely burnished plots, the oblique irony and understated prose; above all, the sense of equipoise. All this The Death of Vishnu has, and more.

A remarkable literary debut [that] reads like the work of a highly skilled and experienced practitioner of the writer's craft.
— Los Angeles Times Book Review

Vivid and engrossing…A work of fiction that seems not only universal but absolutely cosmic.
— Francine Prose - Elle

Manil Suri is a distinguished mathematics professor at the University of Maryland, Baltimore County. Author of three acclaimed novels, including The Death of Vishnu, he is a former contributing opinion writer at the New York Times, for which he has written several widely read pieces on mathematics. He lives in Silver Spring, Maryland.
Loading...
or
Not Currently Available for Direct Purchase