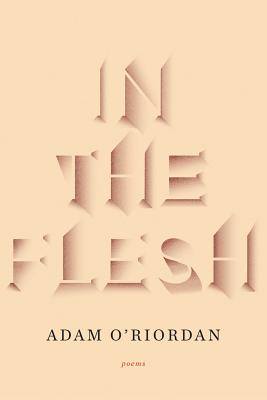 “Precise and attentive. O’Riordan has the painter’s eye for detail and the pianist’s touch for sounding the right notes.”—Simon Armitage

This startling debut from a young British poet traces the paths from past to present, the lost to the living, seeking familiarity in a world of “false trails and disappearing acts.” Here, relatives, friends, and other absences are coaxed into life and urgently pressed on the reader as they surface, in the flesh. At the heart of the collection lies the sonnet sequence “Home,” a slant look at the lives of William and Dorothy Wordsworth, intersected by more recent, sometimes unsettling, personal portraits. Clear-eyed and sensuous, these are poems linked by a strong sense of place and presence, of history captured in an irrevocable moment.


Praise For In the Flesh: Poems…

These are incantatory poems that insist on being read aloud.
— The Guardian

These musical, deftly patterned poems are the products of
a supple susceptibility and a determined intelligence . . . a
convincing and sustained debut.
— Adam Foulds

An astonishing, pitch-perfect voice. 'Huzzah!' we say, to have these poems in the world and in our ears.
— Thomas Lynch

Adam O'Riordan's poems combine verbal grace with powerful feelings and a keen intelligence that extends from the personal to the political with admirable ease. This is an extremely impressive début.
— James Lasdun

After receiving his degree from Oxford University, Adam O’Riordan became the youngest poet-in-residence at the Wordsworth Trust. His poetry collection In the Flesh won the Somerset Maugham Award in 2011, awarded to the best writer under the age of thirty-five. He lives in Manchester, England, where he is the academic director of the Writing School at Manchester Metropolitan University.
Loading...
or
Not Currently Available for Direct Purchase