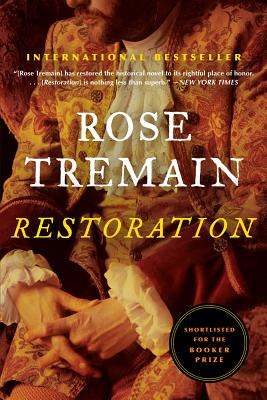 The Booker shortlisted novel that “restored the historical novel to its rightful place of honor” (New York Times).

Robert Merivel, son of a glove maker and an aspiring physician, finds his fortunes transformed when he is given a position at the court of King Charles II. Merivel slips easily into a life of luxury and idleness, enthusiastically enjoying the women and wine of the vibrant Restoration age. But when he’s called on to serve the king in an unusual role, he transgresses the one law that he is forbidden to break and is brutally cast out from his newfound paradise. Thus begins Merivel’s journey to self-knowledge, which will take him down into the lowest depths of seventeenth-century society.

A regal work—here, brought to triumphant attainment, are those elusive ideals of the historical novelist.
— Ruth Rendel - Sunday Telegraph

Rose Tremain's prize-winning books, including The Road Home, The Gustav Sonata, Merivel, and The American Lover, have been published in thirty countries. Chancellor of the University of East Anglia, Commander of the Order of the British Empire, and member of the Royal Society of Literature, she lives in Norfolk, England with the biographer Richard Holmes.

Merivel says that he “no longer lives in an honourable age. What has dawned instead is the Age of Possibility” (p. 4). What does he mean by this?

Merivel’s discovery that the human heart itself does not have any feeling troubles him throughout the book. How does this idea of the heart as unfeeling influence him? How do his thoughts about the heart change?

Why does Merivel start his story five times? What is the effect?

Merivel claims to be “a man of his time,” but in many ways he seems ahead of his time—from his idea of evolution (p. 60) to his impressionist style of painting. What do you make of this?

There are multiple cases where Merivel compares the King to God. In what ways is the King a god-figure for Merivel? Do his ideas about the King change?

In his quest to be “useful,” Merivel tries many different occupations, from artist to Overseer of the poor to physician at Whittlesea. What does he gain from each of these occupations?

Why does Merivel pursue Katherine? Does he truly love her? How do his feelings for her change as the relationship progresses?

Merivel is a committed womanizer, but in a twist of fate he is given a daughter instead of the son he thought he would have. Do you think Margaret will change his ways?

Rosie Pierpont warns Merivel of seeing the King again, lest he live his life in a circle (p. 353). Yet at the end of the novel he is again installed at Bidnold, back in the King’s graces. Has he made any progress or has he fulfilled Rosie’s fears?

Merivel believes himself to be in love with Celia, but might we argue that perhaps the deep loves of his heart are in fact for Pearce and the King? What set of values does each of these two men represent for Merivel, and in what ways does he find himself caught between them?